Check out these animals fighting captured on camera. It is so outrageous that it could have even resulted in the loss of their lives. 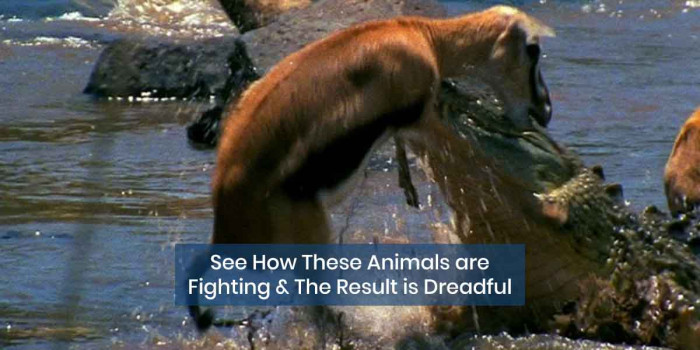 Animals are the cutest creatures on earth. But not all animals could make you fall in love with them. You might find animals posing in front of the camera cute, but at the same time, they can be dangerous if you annoy them. For instance, you may find Mustelids cute and want to own it as a pet. But do you know Mustelids attack prey from the back and bite them with their sharp teeth? Other than Mustelids, here are more animals that are known for their aggressive behavior.

Animals are the best companions, but you can’t disagree that they are also the wildest creatures on the planet. Different animals have different strengths. Some may have the strength to drag or pull heavyweights; others might look small but are powerful than giant-sized animals.

If they can love their friends just like humans, they could also kill them. Don’t believe us? See how brutally they fight and could kill each other.

Note: Do not ever record when animals are fighting. They become aggressive and could harm you in any way.

1. The Fight Between Buffalo and Lion

You might be thinking what’s so new about this video. Certainly, Tiger will win the fight. But you are wrong! Buffaloes can turn aggressive if they are annoyed.

See how this buffalo attacks a lion and kill him. This video was recorded in South Africa.

Cape Buffalo in South Africa is the most aggressive animal and is also known as Black Death. This buffalo is responsible for killing 200 people every year. You would be shocked to know about the habit of Cape Buffalo. They don’t care whether their predator (humans or animals) is injured or not; they continue to attack predators.

You won’t believe that Hippopotamus, which is known to be silent, could be the most aggressive animal in the world. Hippos can easily move in the water, but they can’t swim. They glide through the water by pushing themselves with the help of objects. They have large teeth and tusks through which they attack their prey, including humans.

In the video, the hippopotamus is not attacking other animals but are fighting with each other. You can see their large teeth and the roar that could frighten anyone. Hippopotamus in Africa is responsible for the deaths of over 5000 people. Not only hippopotamus, but these animals could also kill you.

Do you know why they are fighting? Attacking on prey is one thing, but fighting with the animal of the same group is something to be worried about.

Do you know King Cobra is the largest venomous snake in the world? When threatened, they spread their hoods to make themselves look bigger and also make a sound to frighten others. A single drop of venom could attack your human system.

Mongoose, on the other hand, is a furry creature and is known as a ferocious snake fighter. They are agile creatures and can easily defeat the venomous snake. See the video of how mongoose attacks snake. The snake fought bravely and then hid behind the trees.

4. The Fight Between an Elephant and Rhino

Do you think elephants are cute? Yes, I find baby elephants the cutest animal on the earth. Elephants are incredibly smart. They can mimic human voices and also identify the body language by understanding the human pointing.

But do you know an elephant could turn aggressive if harmed or injured? See how this African elephant fought with Rhino and threatened him. I thought the elephant would run away!

Both the animals are scary and could turn aggressive if threatened. Python is one of the largest snakes but is non-venomous. They kill their prey by squeezing them until they stop breathing. They are camouflaged animals and usually hide in the trees.

Alligator is also a scary and cold-blooded animal. In the video, the alligator with his powerful jaws holds the snake in his mouth. It becomes next to impossible for a snake to escape. But after exhausting hours of battle, alligator gives way to python. This is rarely seen when the animals leave their prey to get back home.

Animals are aggressive, and at the same time, adorable. But these fights of animals scared the hell out of me. Have you ever seen animals fighting? How was your reaction to it? Did you feel scared? Share your views with us!