7 Amazing Facts About The Mysterious “Vampire Squid” From Deep Sea

Found in the world’s temperate and tropical seas, the vampire squids are scary-looking but innocuous cephalopods. Explore some fascinating facts about these mysterious deep-sea creatures. 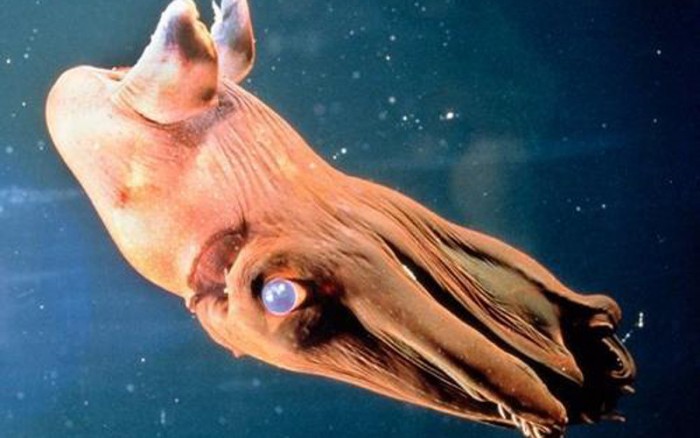 Vampire squids are the menacing-looking deep-sea cephalopods that are found in the world’s temperate and tropical seas. Vampyroteuthis infernalis, literally meaning  "vampire squid from Hell, is the mysterious and unique sea creatures having retractile sensory filaments. They have characteristics of both squid and octopus. As a phylogenetic relict, it’s the only known surviving member of its order.

1. Vampire Squid Can Swim at Speeds Same as Two Body Lengths Per Second 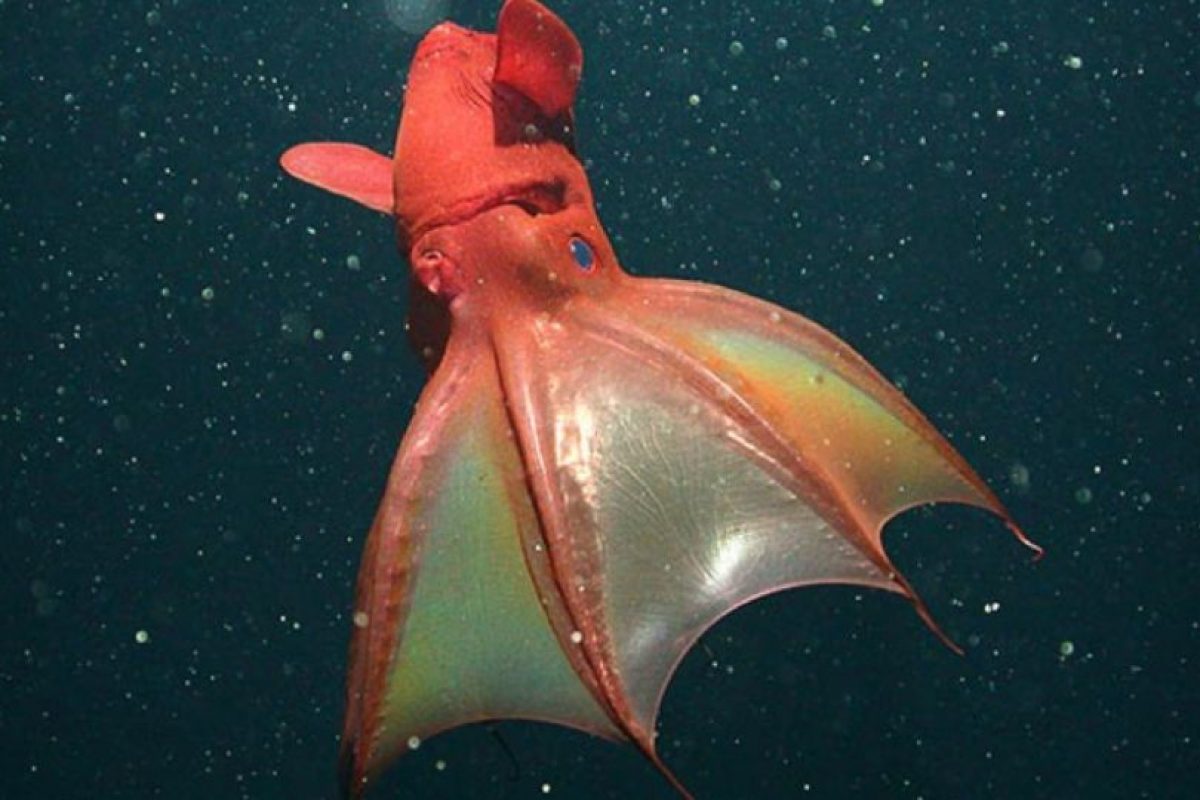 Vampire squids use their long velar filaments to float in the deep, black sea currents. With its quick acrobatic movements, it investigates the entity that comes in contact with its filaments. Capable of swimming at speeds similar to two body lengths per second, its acceleration time is 5 seconds.

2. Strangely Enough, It Doesn’t Suck Blood But Rather Scavenges 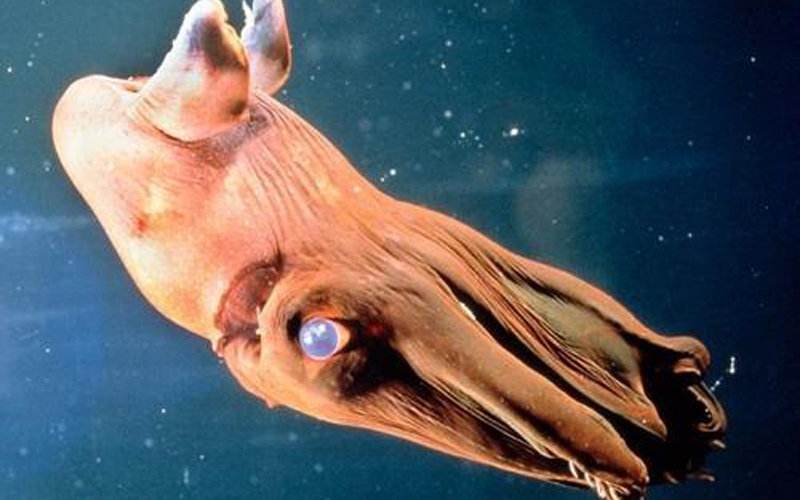 Unlike vampire bugs and other vampire-named land and sea creatures, vampire squid does not actually feed on blood. Instead, it feeds on marine snow (falling organic detritus). And its name ‘vampire squid’ was, in fact, inspired by its dark color, cloak-like webbing, and red eyes. 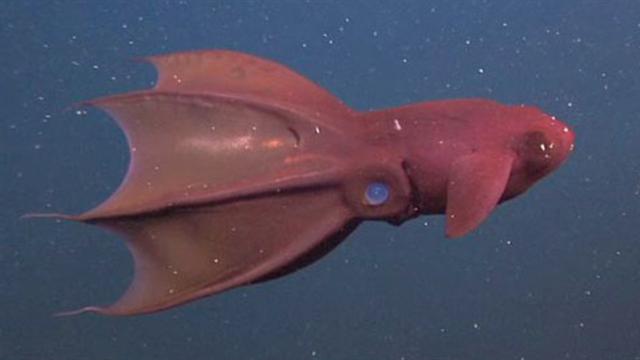 An extreme example of a deep-sea cephalopod, the vampire squid is believed to live at aphotic (lightless) depths of around 2,000-3,000 ft or more. In this region of the ocean lies distinct habitat called oxygen minimum zone (OMZ) where oxygen saturation is too low to support aerobic metabolism in most of the higher organisms. It has the ability to live and breathe normally in the OMZ at oxygen saturations as low as 3% that no other cephalopod in the world and only a few other animals have.

4. It Has Developed Fascinating Life Survival Adaptations to Cope With Life at Such Suffocating Depths 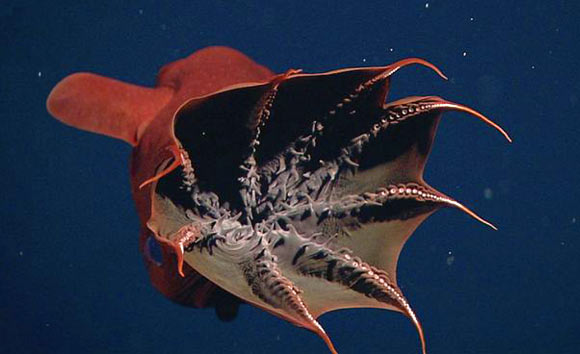 In order to survive the smothering depths, the vampire squids have developed many amazing adaptations. Having the lowest metabolic rate among all the deep-sea cephalopods, they have weak musculature. But because of its highly evolved statocysts  (balancing organs similar to a human's inner ear), it almost effortlessly maintains the agility and buoyancy.

The hemocyanin in their blue blood binds and transports oxygen far more efficiently as compared to other cephalopods, aided by gills with an extremely large surface area. Its ammonium-rich gelatinous tissues nearly match the density of the surrounding seawater.

When the vampire squid feels some kind of threat, it turns its caped arms “inside out”. This defense mechanism is called a “pumpkin” or “pineapple” posture. By taking this form, it presents an outwardly larger form that is covered in scary-looking but harmless spines (cirri).

Its underside is highly pigmented and hides most of the body’s photophores. Its gleaming arm tips help shield its head. With its bioluminescence abilities, it diverts attacks away from critical areas. And even if a predator bites off an arm tip, the vampire squid can regenerate it.

6. It Perplex the Predator With Bioluminescent “Fireworks” & Erratic Movements

These deep sea cephalopods use innovative tactics to avoid predators and conserve energy. Their bioluminescent fireworks alongside squirming of glowing arms, unsteady movements and escape trajectories make it hard for a predator to recognize a single target.

7. Goldman Sachs & Other Megabanks are Dubbed as “The Great Vampire Squid” 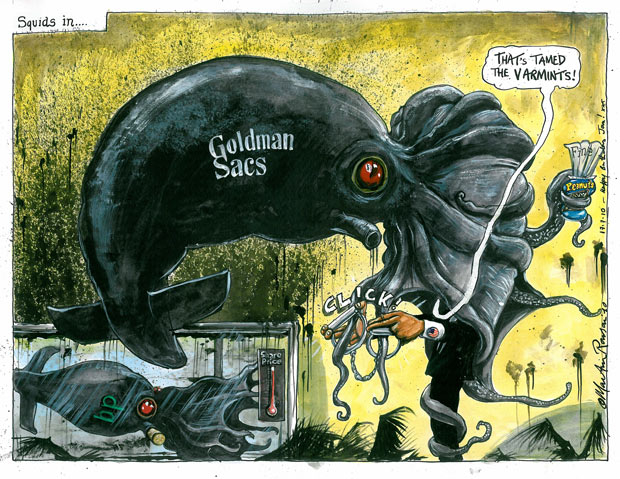 The popular American author and journalist Matt Taibbi called the investment bank giant a great vampire squid in his 2009 article. He stated,

“The first thing you need to know about Goldman Sachs is that it's everywhere. The world's most powerful investment bank is a great vampire squid wrapped around the face of humanity, relentlessly jamming its blood funnel into anything that smells like money.”

It eventually became common for referring to Goldman and other mega-banks.