5 Historical & Beautiful Places to Visit in the Orchha State

Check out some of the historical and most enchanting places in the Orchha State of Madhya Pradesh, India, that reflect the legacy of Bundela Rajput kings. 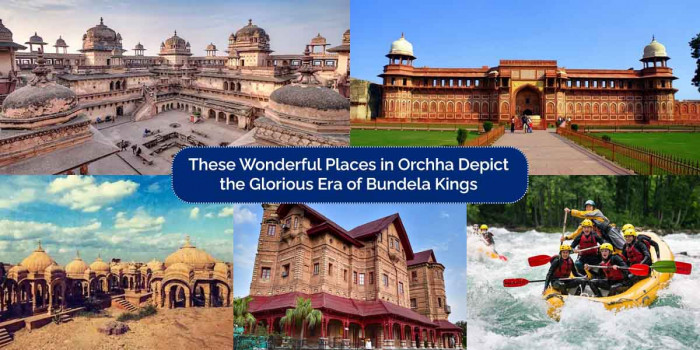 Do you ever plan to visit any of the famous historical places located across the world? If you do, then many historical towns and cities in India that represent its unique and diverse culture and traditions. One of the most notable historical towns is Orchha State, founded by the first Bundela Rajput King Rudra Pratap Singh back in the early 16th century (1501 AD).

Orchha State, which is present-day Tikamgarh in the Indian state of Madhya Pradesh, was a kingdom in the Bundelkhand region and later a princely state in British India. Located 17 km away from Jhansi, the sites still retain their historical value and original grandeur, and visiting them gives a glimpse of its rich past.

Here are some of the historical tourist attractions that are a symbol of the powerful Bundela kings and should be visited in Orchha. 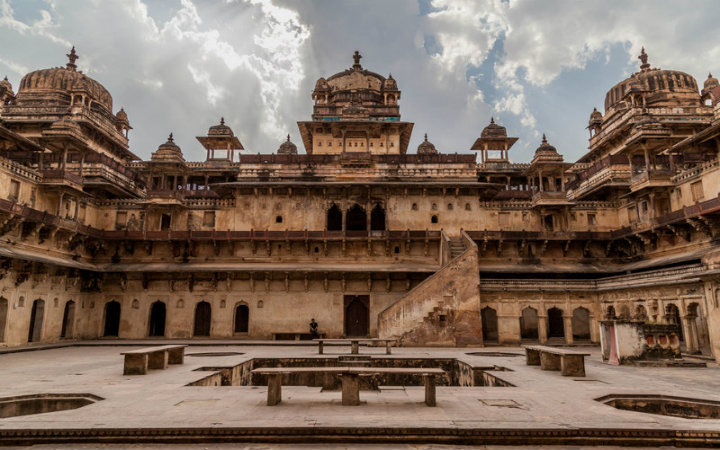 You should begin your tour from the Orchha Fort complex. The multi-story fort complex has myriad ancient monuments such as forts, palaces, temples, and other edifices. It lies within an island made by the confluence of Betwa and Jamni rivers.

The Bundela Rajputs constructed the fort and the structures within the complex. The fort complex comprises arched causeway, big gateway, palaces that surround the vast quadrangular open yard, a temple, gardens, and pavilions.

Some of the striking architectural features include projected balconies, ornamented battlements & latticed windows, and open flat areas. The major attractions within the are fort complex are Raja Mahal or Raja Mandir, Sheesh Mahal, Jahangir Mahal, and Phool Bagh.

The light and sound show at Orchha Fort is one of the major highlights of the tour. It is run in two languages - Hindi and English, and the story of the Bundela dynasty is showcased with a blend of laser light and music. 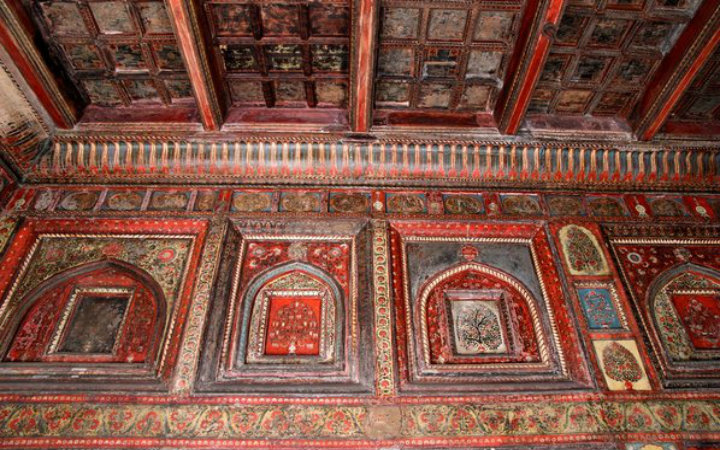 A citadel and garrison situated within the Orchha Fort Complex, Jahangir Mahal, was established by the King Vir Singh Deo in the 17th century AD when the Mughal Emperor Jahangir first visited the city.

It is also known by various other names such as Citadel of Jahangir, Orchha Palace, Mahal-e-Jahangir Orchha, and Jahangir Citadel. This 3-story structure features elegant porches, apartments, and hanging balconies.

The walls of the Jahangir Mahal are adorned with paintings of Lord Rama and Krishna using colors prepared from vegetable dye. Its domes were built as per Timurid customs.

3. The Royal Chhatris or Cenotaphs 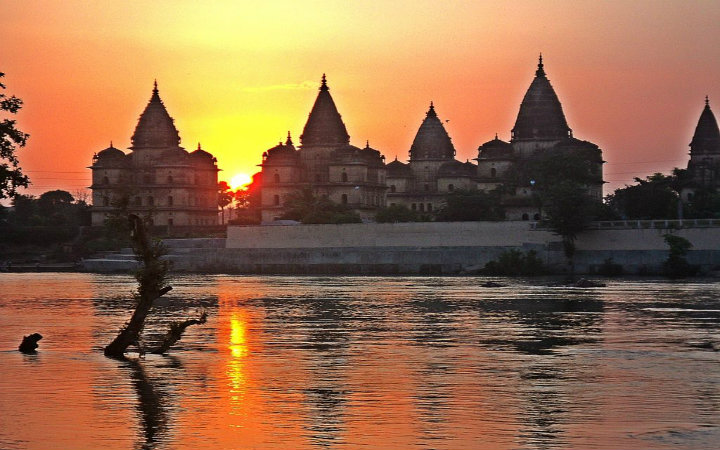 Another important site to visit in Orchha is the famous Chattris built on the cremation site of the deceased Bundela kings to honor them. Various cenotaphs or chhatris lie in the vicinity of the fort and Betwa river.

The majority of these cenotaphs are in a single compound and look similar. Among all these fourteen Chhatris, Vir Singh’s cenotaph is unique and features Islamic elements such as massive domes and grand pillars.

These 3-story Chhatris resemble a semi-closed umbrella and can be seen all through the riverbanks. Either river rafting or through the land, you can reach this site. It is recommended not to visit them after sunset. 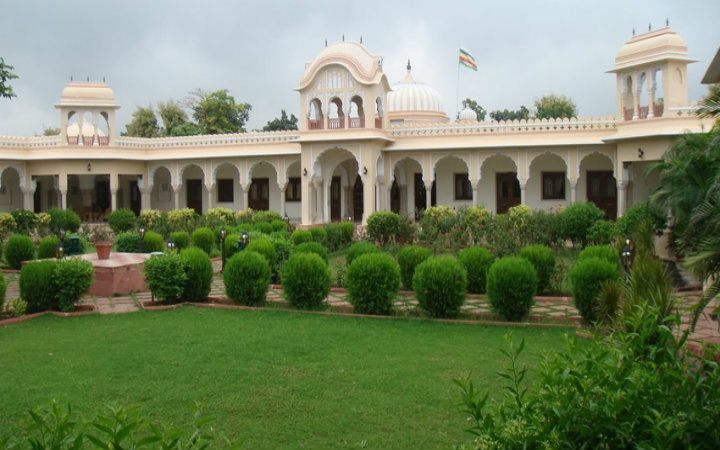 Dating back to the old times, Amar Mahal’s architecture is constructed like that of a Rajput house. It features various majestic Bundela paintings and depicts the tales of the bygone era. It overlooks the grand cenotaphs and the River Betwa in Orchha.

The visitors can enjoy the local Bundelkhandi dishes for a fantastic dining experience. You can also witness the scenic view of the monuments, surrounding hills, and wildlife sanctuary. 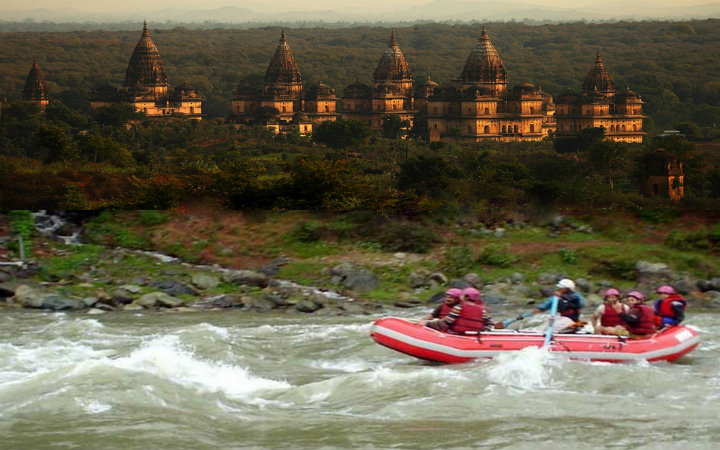 The river Betwa, also known as the Ganga of MP, is a perennial river in Orchha that splits into seven channels called Satdhara.

If you are an adventure freak, you can visit the riverbanks Betwa river in Orchha. You can indulge in fun and water adventure sports like river rafting, boating, and kayaking at River Betwa. Here you can go for two different river safaris at Orchha, organized by Madhya Pradesh (MP) Tourism.

The river safari starts from the picturesque Kanchana Ghat. The 90-minute package (first leg) concludes at Shiv Ghat with refreshments, and further, the 3-hr package (the second leg is 6km long) comprises breakfast or lunch at Shiv Ghat and reaches up to Note Ghat.

Orchha, which means ‘a hidden place,’ is the ancient medieval town that stands true to its name as it remained undiscovered until Rudra Pratap found it. It surely can instantly make any visitor fall in love with its scenic beauty and magnificence.

The best time to visit Orchha is from January to March and October to December when the weather is calm and pleasant. If you wish to see flora and fauna like Kardhai trees, spotted deer, jackal & blue bull, do visit Orchha Wildlife Sanctuary.

Besides, there are many temples in Orchha to visit, like the famous Ram Raja Temple, Chaturbhuj Temple, Laxminarayan Temple, and others. Opposite the Ram Raja Temple, you can visit the Sheesh Mahal hotel for a luxurious stay and dining experience. You can get a feel of royalty by staying at the royal heritage hotels like this in Orchha.

Whether you are a nature or wildlife lover, a religious individual, a history buff, or an adventure freak, Orchha has something in store for one and all! If you’ve ever been to any place in Orchha, do share your experience!