Do songs feed your soul? If yes, then listen to this All-Time Top 10 songs from The Hot 100's of Billboard. Enjoy the biggest hits of all! 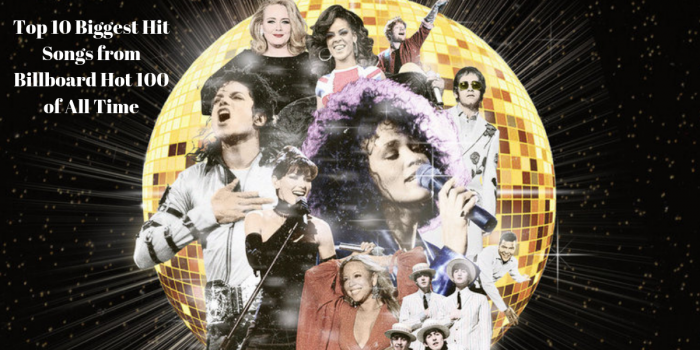 This year in August, Billboard will celebrate the 61st anniversary of Hot 100 chart. Yes, we're talking about some of the biggest artists and singles in the chart's history. And, here we will revisit the 10 biggest hits of all time.

Billboard launched the Hot 100 on Aug 4, 1958. Well, the chart remains the gold-standard ranking of America's top songs each week, even 61 years later. And from Chubby Checker on the first to Olivia Newton-John on the last, here is the hottest-of-the-hot list of the top 10 songs of all-time.

This list of the most popular songs is created based on its sales, radio airplay, and streaming data.

In 2008, Billboard magazine compiled a ranking of the 100 best-performing songs on the chart over the 50 years for the 50th anniversary of the Hot 100. In 2013, for the chart's 55th-anniversary edition, Billboard revised the rankings.

So, to commemorate this musical landmark Billboard list, here we are listing the all-time top 10 artists and top 10 songs over the 61 years of the Hot 100, through June 2019.

The Twist was on the 1st position for around three weeks in both years 1960 and 1962. Also, it is the only single to be at the 1st place twice on the Hot 100 in two different chart runs. The dance number caught on the older generation, after topping the chart in 1960. On Oct 22, 1961, Checker was invited to perform “The Twist” on “The Ed Sullivan Show,” prompting a re-release of the single and a full-page ad in Billboard that announced,

“‘The Twist’ dance rage explodes into the adult world!”

Some reports suggest that to send the song back to No. 1 in early 1962 the grown-ups bought enough copies.

More importantly, this song started a dance craze that got much popular. Well, one reason behind it was as it is so easy to do. Yes, even the severely rhythm-challenged person could do The Twist. Once, Chubby Checker explained it as-

“Putting out a cigarette with both feet and coming out of a shower and wiping your bottom with a towel to the beat.”

Moreover, since both kids and adults could do it, this helped bridge the generation gap.

Another fact which made the dance step popular is the participants didn't touch each other while dancing. This became a new trend, especially with disco dancing.

Also, “The Twist” was a worldwide phenomenon since the time it got released. Checker recorded versions in Italian, French, and German.

Now on the second position but the song was on no. 1 for 12 weeks (1999). Originally it was decided that Rob Thomas (of Matchbox 20) will only write this song for Santana and some other singer was going to sing the track. But, when Thomas was explaining to Santana that how is song supposed to sound after final recording, Santana asked him only to sing this song for the album.

And, the rest is history as “Smooth” became the biggest hit of both their careers. Well, that’s not it because it also ended up being the second biggest recording of all time.

Even if the song is on the third position now, but for around nine weeks, this song was in the first position.  To recognize the 3rd biggest song ever recorded, let's step back in time for a bit. Initially, Darin didn’t even want this song to get released. But, the studio released it anyway as no one can stop anything good to happen. And eventually, it not only became the biggest hit of his career but is also the third biggest recording in history.

Interestingly, this was a US Top 40 hit for seven different artists:

However, the first three versions of the above list are instrumentals. Among all, Armstrong was the first to chart with a vocal version.

There is one interesting fact about the song that it was used by McDonald's in the late '80s to promote their dinner specials as "Mac Tonight." However, in the versions used for the commercials, they skipped the lyrics about killing a guy and dumping his body in the water.

Originally, LeAnn Rimes recorded this song for the soundtrack of the Nicolas Cage movie Con Air. But it was rejected, and its producers preferred Trisha Yearwood's version, which reached #23 in the Hot 100 of Billboards.

Now on the fifth position but the song was on the first position for around six weeks. Yes, you read it right! Moreover, it is the 5th biggest song in history, and LMFAO is responsible for it. The grandson (SkyBlu, a.k.a. Skyler Husten Gordy) became a bigger hit than any single released by Motown as the song was recorded by Motown founder Berry Gordy’s son (Redfoo, a.k.a. Stefan Kendal Gordy).

Following "Rolling In The Deep" by Adele, this was the second-best-selling single of 2011 worldwide.

Overtaking Elton John’s “Candle in the Wind 1997,” it is the biggest-selling single of all time in Australia. It is the third best-selling digital song in US history.

Moreover, the song had a very interesting chart run. Yes, the song first appeared on the Hot 100 on February 12 at #78, released on January 25, 2011. Further, it dropped out the next week, but then again returned in April to the lower reaches of the chart. The song slowly rose up the chart, as the video (released March 8) picked up steam, finally peaking at #1 on July 16 in the same year.

For 14 weeks (2009), the song was on no. 1 position. Yes, a couple of times, The Black Eyed Peas have been on this countdown. Although this is far and away from the biggest hit, they have ever had.

Another interesting fact about the song that the song was the first ever single to be downloaded more than one million times in the UK.

"It's exhilarating to know we are so connected to our Peabodies. Hopefully the good vibes from that song will continue to brighten people's lives."

Today on the seventh position but the song was on 1st position for 14 weeks (1996). In 1993, the original version of this song was recorded and that too in Spanish only. However, further Miami’s Power 96 played songs in English and also asked Carlos De Yarza and Mike Triay, the Bayside Boys to remix of the song.

Must say that the song became a national phenomenon as Singer Patricia Alfaro recorded their new English lyrics. You will still hear it in parties, stadiums, and several events.

Topping over 25 charts internationally including the ones in Australia, Ireland, Canada, Italy, UK, New Zealand, and the US, the song was the Black Eyed Peas' most successful single of their career.

For an amazing ten weeks, this song was in the first position. However, the song would be considered weak by today’s standards. “Physical” was taken as one great song back in 1981. Even after the song came with a lot of struggle, it appeared to come out on top.

Now on ninth position, the song was on the first position for around ten weeks (1977). Boone said to Billboard:

“Because the lyrics really lent themselves to how I felt about my relationship with the Lord, that’s the way I chose to sing it. I never thought anyone would know.”

However, this song was Boone's only hit. Therefore it didn't take her long to fade from the spotlight. But for this song, Boone won the 1977 Grammy as Song of the Year. And, also won as Best New Artist that year.

On no. 10 right now but was on No. 1 for around nine weeks (1968). You may think that the Beatles would have had more top 100 songs in this list. But, the point is their number 1 song only stayed on top for a couple of weeks. And this song is the exception.

With a run at number 1 of 9 weeks, it is one of the top 10 biggest songs of all time. Also, this song is the longest No. 1 in terms of running time, i.e., seven minutes and 11 seconds.

Moreover, the song made history by becoming the first ever single to reach the top 10 in its first week on the chart as it debuted at #10 in the Hot 100.

So, we have seen the all-time top 10 songs according to Billboard. Tell us which one you like the most?