10 Most Bizarre Eyes That Will Creep You Out

Eyes are one of the most important human organs. You can read this only because of it. They are our only visual system. We can f... 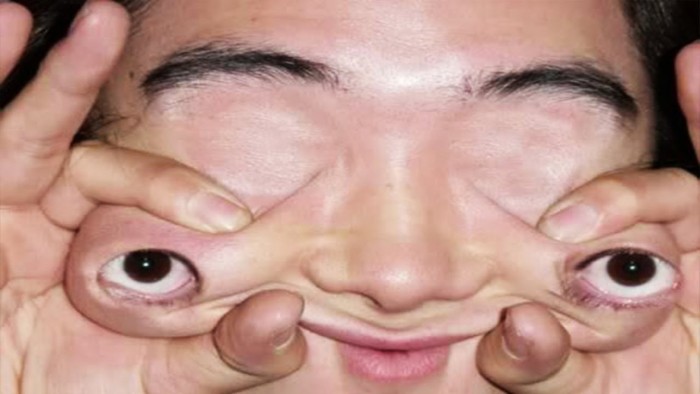 Eyes are one of the most important human organs. You can read this only because of it. They are our only visual system. We can feel the troubles that blind people face. We consider them very unfortunate for not being able to see. But there are some people who despite having their eyes, face the same trouble as the blind.

Even small particles of dust in the eye cause us so much inconvenience. Imagine the suffering of those having two pupils in one eye or no eyeball.

It’s tough to visualize but people are still living very normally with their bizarre eyes. Here is a list of the most bizarre eyes in the world. 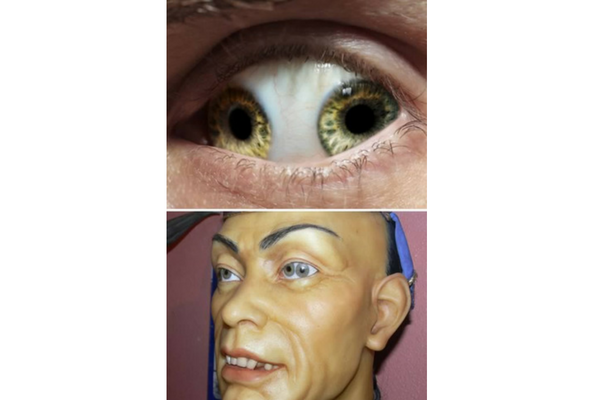 The term ‘pupula duplex’ is a Latin word which means double pupil. Pupula duplex is an extremely rare condition where the person has two pupils and two irises in the same eye. The condition is so rare that it is often considered as a hoax. It is non-existent in medical science but people say that the Chinese Minister of State, Liu Ch’ung in 995 AD suffered from this.

The above picture of Liu Ch’ung left the world stunned after it featured on Ripley’s Believe It or Not. A wax rendition of the man is also place in the Louis Tussaud’s Palace of Wax. 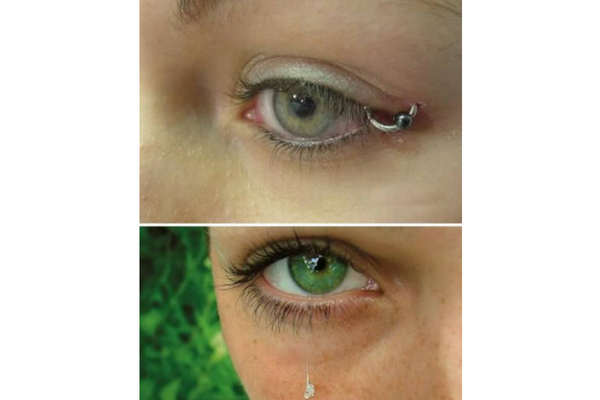 Eye piercing is different from eyebrow piercing. This piercing is quite expensive and very rare. It requires a surgeon to perform this job. They are normally done through cosmetic surgery. Eye piercing includes jewellery inside the eyes; it may be either on eyeballs or through eyelids. This process is definitely risky but a head turner.

Watch how piercing is done

A 19 year old boy had a hairy mass inside his eyes since his birth. The size of hair and the volume kept growing with age. He visited to the ophthalmology clinic of Dr. Leili Pourafkari and Dr. Ali Mahdavi Fard. This condition is caused by a tumor called limbal dermoid. An eye doctor may see only one or two cases like these in their entire career. Such tumors contain tissues that are normally present in other parts of the body. The hairy mass was removed by surgery.

The presence of the hairy mass caused vision defects, discomfort while blinking and a sensation of the presence of foreign body. The boy did not feel any pain due to the hairy mass but this really bizarre. We can’t even look into his eyes and he has been growing up with it. 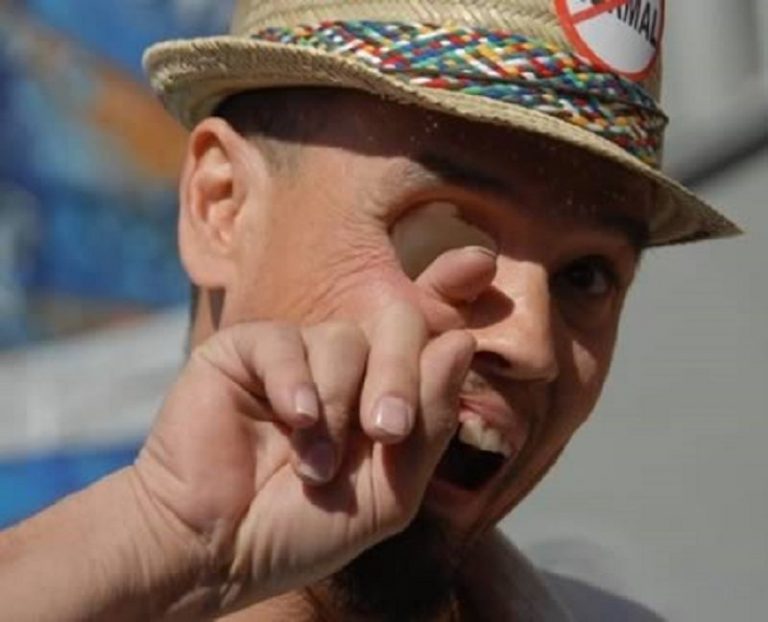 Billy Owen was a successful motorcycle mechanic. He lived with his wife and six months old son happily. A sinus turned around his happy world upside down. On February 13, 2009, Owen was diagnosed with sinonasal undifferentiated carcinoma (SNUC). It is a rare form of cancer that affects the entire nasal cavity and the person has only 10% chances of survival.

The cancer had affected Billy’s body so much that the doctors had to remove half of his right side face. This included nerves, muscles and even his right eye!

Now, Owen’s right eye is removed. There is giant hole in that place. Despite being crying over his bizarre eyes, he has found out means of earning from it. He performs zombie acts for music videos and haunted shows. He also featured for telling his story on AMC’s reality show Freakshow. He can even take his finger inside the mouth and bring it out from the hole. 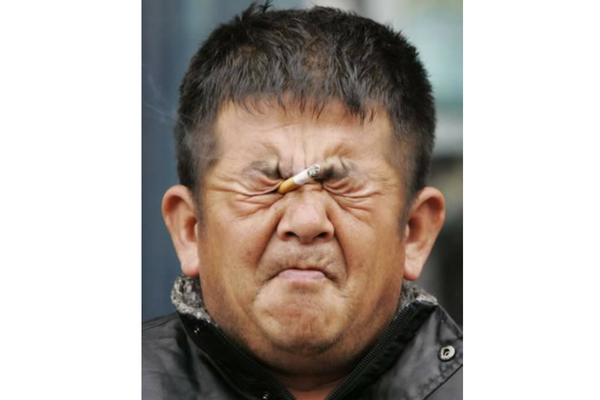 This guy from Shanghai has mastered the art of smoking from his eyes or ears and then exhaling through his mouth. He inserts the cigarette in his eyes and crunches his face for taking the drag. This kind of internal suction cannot be performed by all smokers. He then exhales smoke through his mouth for entertaining the onlookers. The same act is performed through his ears also. 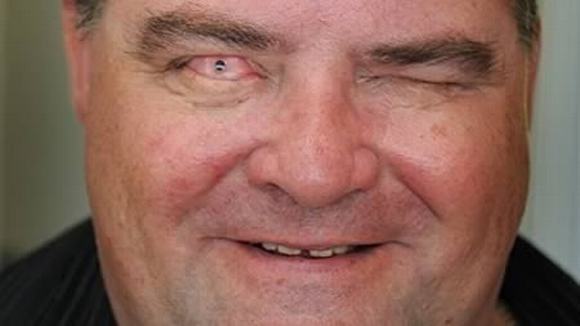 Martin Jones lost his vision and remained blind for almost a decade. He has regained his vision after the implantation of a tooth in his eye. A canine also known as ‘eye tooth’ was implanted; it was Jones’s own tooth. Doctors placed a man made lens on its base. It would facilitate the growth of tissues over the canine. It was then place under his eye lid. A skin flap from the mouth was also implanted over the eye tooth so that it can have access to its blood. A hole in the cornea was cut for the light to enter into the eye.

This might seem bizarre eye to you but this procedure has gifted vision to over 600 people. 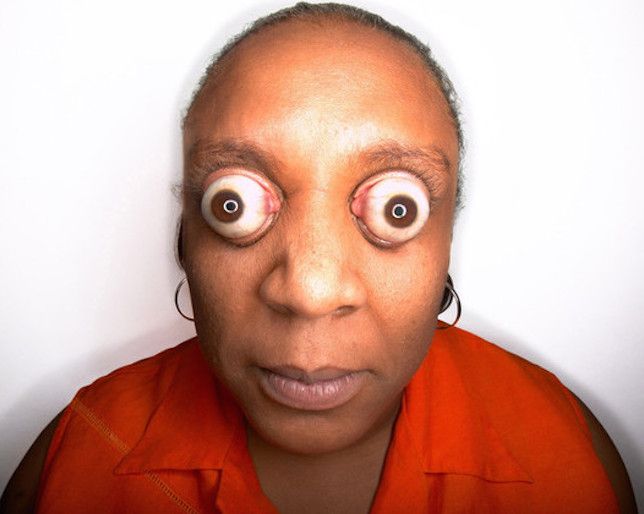 Kim Goodman can pop her eyes out of her sockets upto 12 millimeters (0.47 inches). She even holds world record for farthest eyeball protrusion. The woman lives in Chicago, Illinois. One day when she was hit by a hockey mask on her head, her eyeballs popped out much further than the usual and that’s when she discovered her talent. Since then, she pops out her eyes. It also happens while yawning.

On November 2, 2007, Kim’s eyes were officially measured in Istanbul, Turkey. 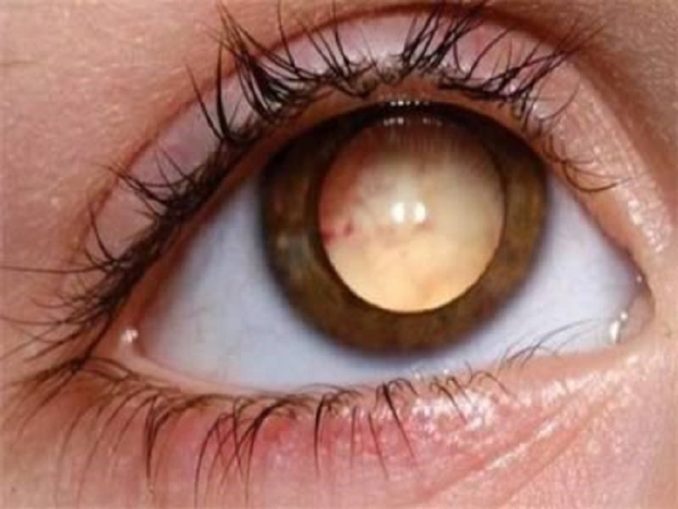 Retinoblastoma is a rare form of eye cancer. It develops rapidly from immature cells of retina which is the light detecting tissue. Children below the age of five years are usually affected by this. Most children survive the condition but at the cost of losing their vision in the affected eye or removing their eye.

2. Two teeth tumor in the eye 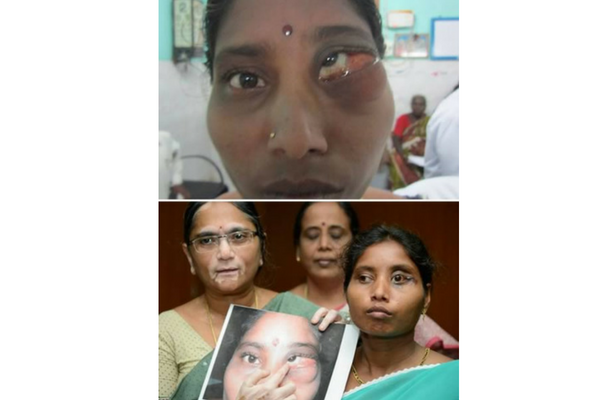 Nagabhushanam Siva had developed a tumor of two teeth in her eye. Even doctors were stunned to find the cause of her bizarre eyes. They found two fully formed teeth embedded inside. They call this condition as Teratoma. At a government hospital in Chennai, Southern India, doctors diagnosed her. Her eye was pushed inside and protruded by the skin; the tumor blocked her vision and partially damaged the optic nerve. As a result of the growing skin, she could not move her eyeball and it also created lazy eye syndrome.

This case was even unfamiliar for the doctors since cases of Teratoma came their way but fully formed teeth were very rare to see. 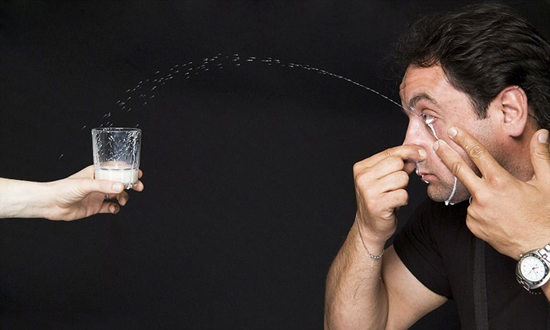 Ilker Yilmaz is a construction worker from Istanbul. He has done something so bizarre that it has broken the most unusual records that have ever existed. On August 31, 2004, the 28 year old man loudly snorted milk up his nose and squirted it through his left eye. The distance of this squirt was 2.795 meters (9.2 feet). This would probably be a world record.

All images sourced from Oddee.

10 Incredible Facts About The Most Famous Auto Brands