And this is what happens when the Real Madrid forward and ace footballer Ronaldo misses a penalty! 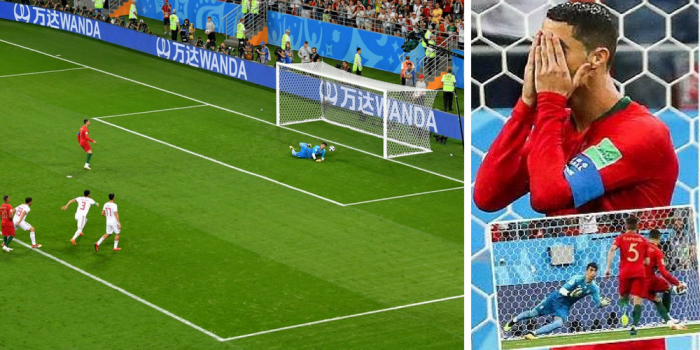 If you are a FIFA fan, you know how exciting it is to watch your favorite team scoring a goal against the opponent. No doubt, the matches leave the audience curious and worried at the same time for the results. But in FIFA 2018, the ace performer Cristiano Ronaldo left everyone in shock after he missed a penalty in the last match against Iran on Monday.

It seems at times the world belongs to him, his followers and other corporate ambassadors but his missed goal in the last match has marked some patchy answers.

His missed penalty on Monday cost team Portugal a 1-1 draw against Iran. But it seems that fans are not happy with the results. FIFA fans and twitterati lashed him out on the missed penalty and made some crazy jokes on him.

Ronaldo was aiming to goal and ended up in draw with Harry Kane for the golden boot. Unfortunately, his effort was saved by Iran goalkeeper Alireza Beiranvand.

And sooner, the Twitteratti exploded after he missed the goal and here’s what they had to say!

When Cristiano Ronaldo Became The Victim

Alireza Beiranvand is the first goalkeeper to save a World Cup penalty from a Portuguese player in the tournament's history (excl. shootouts).

Obviously, Messi Fans Had To Interfere When Ronaldo Is The Talk Of The Town

Was This Messi’s Reaction? (Oh God! Please Spare Him)

Ronaldo Missed The Goal As A Gift For Messi’s Birthday, Like Really?

Ronaldo misses a penalty. Wow this guy is just awesome, decided to miss the penalty as a gift for Messi's birthday. Ronaldo what a guy, so considerate of others. #IRNPOR #worldcup

And How Can You Forget The Heroic Save By The Iranian Goalkeeper!

No one will give the credit to Ali Beiranvand because the penalty is missed by Ronaldo, a brilliant save against a good player. #PORIRN

When everyone was gossiping about Ronaldo’s missed penalty, there is someone cheering out for the goalkeeper who played brilliantly against this experienced player.

So what do you think? Is Ronaldo bad at Penalties?