Pareidolia is a mind trick that lets you see funny faces and drawings when there is nothing. Here are the cases when people experienced pareidolia in the most unexpected places. 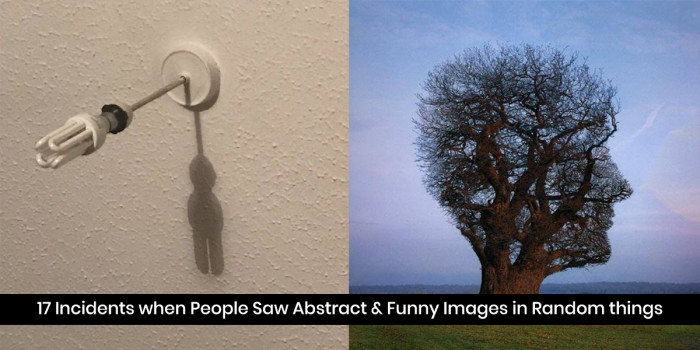 Have you ever heard about the term Pareidolia? Do you know what does it relate to? It is a psychological phenomenon that causes people to see unique and random patterns in a stimulus. For instance, seeing shapes in clouds, or hearing hidden messages in music, and hearing indistinct voices are common examples of pareidolia.

The word Pareidolia is derived from the Greek words para, which means wrong and eidolon means in the form of an image. So it is a type of phenomenon which makes you see patterns in random data.

Do you know the reason why people experience pareidolia? According to the study, cognitive processes are activated by the object, which makes people alert about the identity and emotional state of the object before the mind begins to receive the information.

Some experts believe that pareidolia has religious overtones. It is said that people who are religious or believe in supernatural power experience more faces in lifeless objects. The famous painter Leonarda Da Vinci wrote-

“If you look at any walls spotted with various stains or with a mixture of different kinds of stones, if you are about to invent some scene you will be able to see in it a resemblance to various different landscapes adorned with mountains, rivers, rocks, trees, plains, wide valleys, and various groups of hills.” 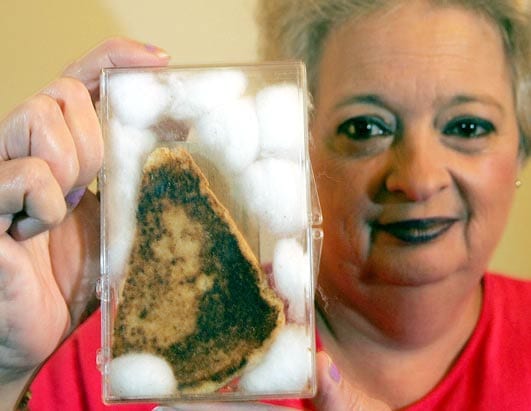 The most famous example of pareidolia occurred in 1877 when an observer viewed the surface of Mars. He thought he saw faint straight lines, which were then identified by some as Martian canals. This made headlines, a few years later, stronger telescopes were designed to check the new images. Unfortunately, the new images didn’t show any faint lines, and the incident was debunked as an example of pareidolia.

Another famous example of pareidolia is related to the religious image, the Shroud of Turin. A cloth bearing the image of a man is believed to be Jesus, who suffered trauma consistent with crucifixion. Some visitors to St. Mary’s in Rathkeale say a tree outside the church bears a silhouette of the Virgin Mary. In 1977, the appearance of Jesus Christ on a flour set the standard of miracle sightings. This incident happened in New Mexico, 40 minutes South of Roswell.

You will be surprised to know that Diane Duyser of Miami sold ten years old grilled cheese sandwich, for $28,000 on eBay, she said -

“I went to take a bite out of it, and then I saw this lady looking back at me.”

It resembles the Virgin Mary. She wrapped the sandwich in a plastic bag and left it in her freezer for the next nine years. In 2003, she put the sandwich up for auction on eBay with the proviso that it was “not intended for consumption.”

It was in 2004 when Steve Cragg, the director at Memorial Drive United Methodist Church in Houston, Texas, found a Cheeto that resembles Jesus. Later in 2007, in Singapore, a callus on the tree looked like a monkey, and believers called him the “Monkey God.”

In 2012, several people made a pilgrimage to a tree at Bergenline Avenue in West New York to see a scar on the tree that resembles the image of the Our Lady of Guadalupe depiction of the Virgin Mary.

These were the incidences experienced by people. Have you ever tried to search for the shapes in clouds or have seen a cute face in a burnt toast? If not, here are some people who have experienced this phenomenon in several unexpected places.

Scroll down and see our compilation of the funniest scenes that would make you laugh and think is it true?

The Best Incidences of Pareidolia Experienced by People 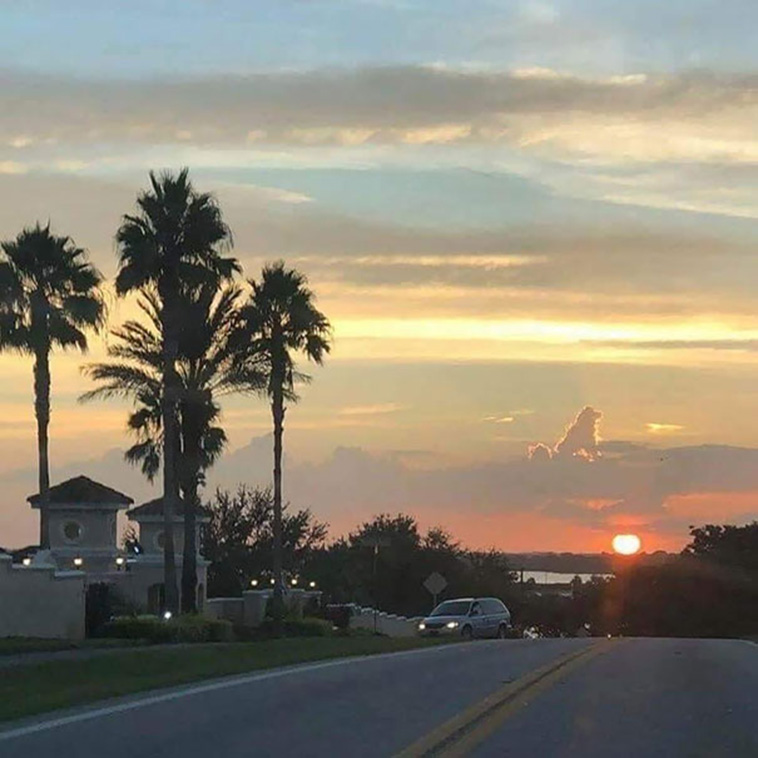 Wow! This is so cool. Dogs have unconditional love for all, so, they deserve to go to heaven.

2. Who Captured This Shark? 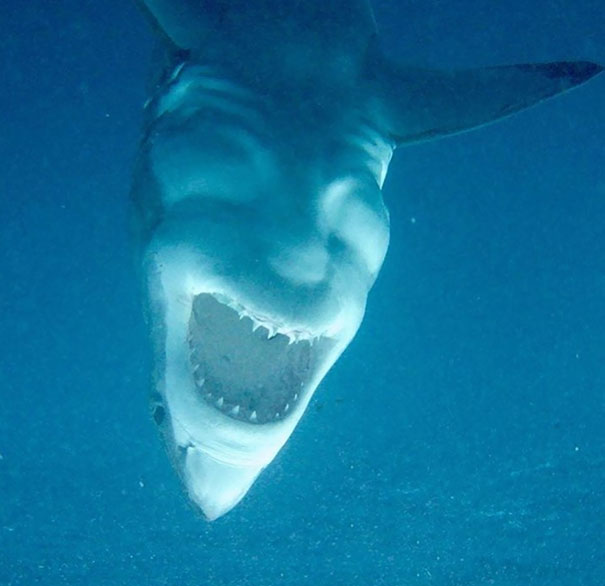 I am still confused- is it a shark or someone laughing maniacally.

3. This White Lady in the Waterfall 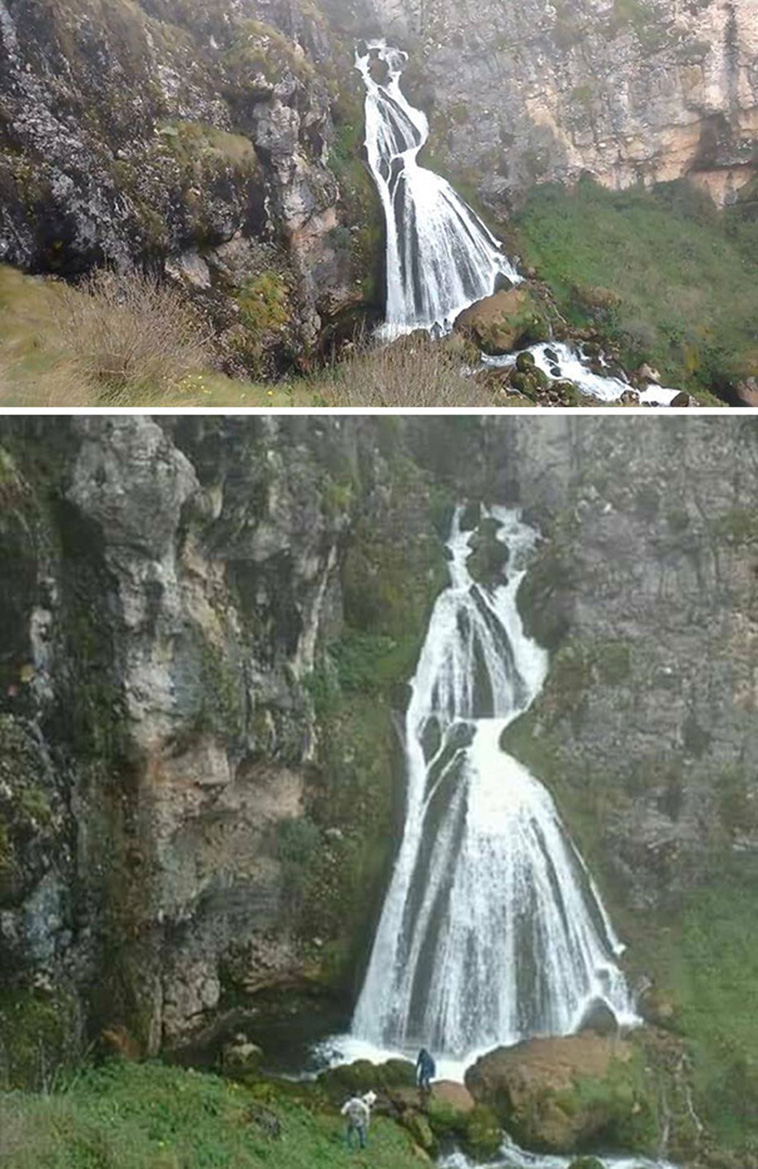 I bet! You will see this picture TWICE. 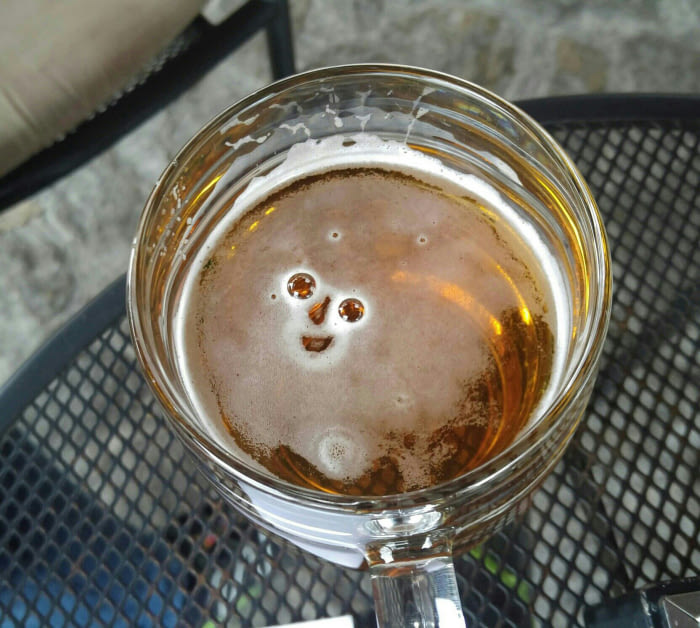 This beer bubble face has made someone's day.

5. When the Nature is also Tired of Hearing Your Life’s Shit 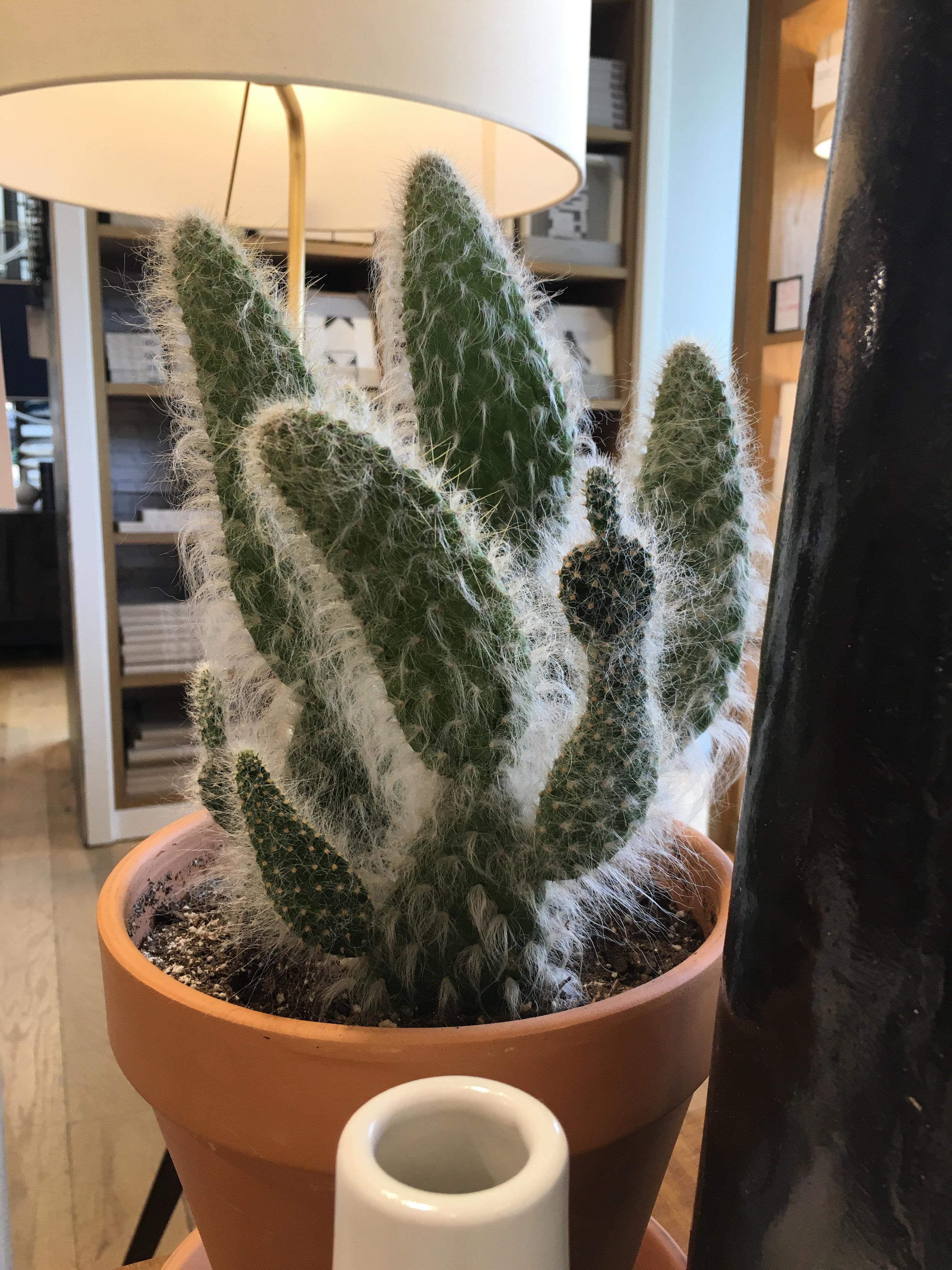 Is this cactus showing a middle finger? Really? 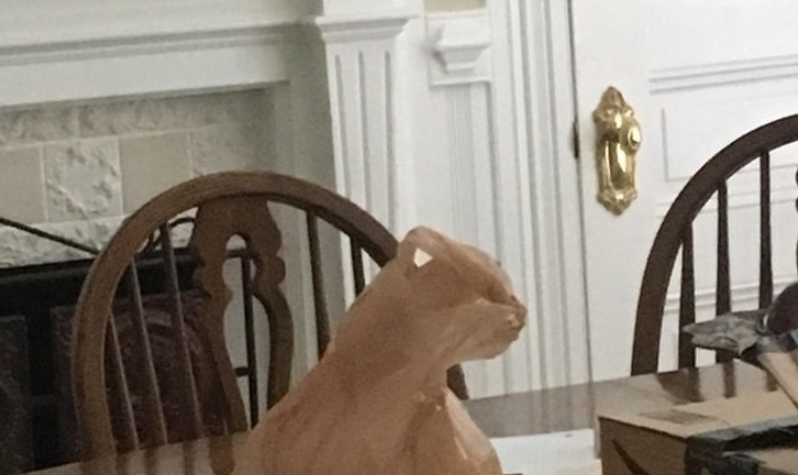 I know that cats have a love-hate relationship with plastic bags. They are fun to spend time. Well, I guess a cat is sitting in a bag. 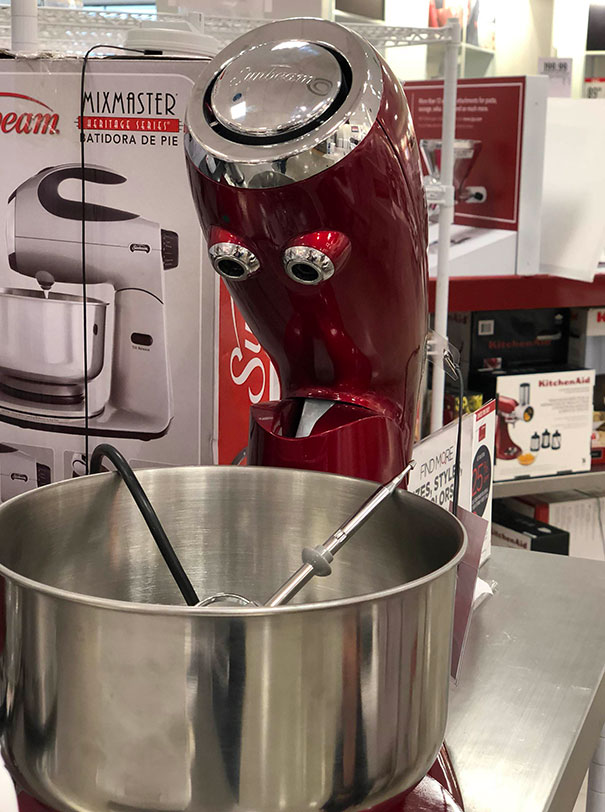 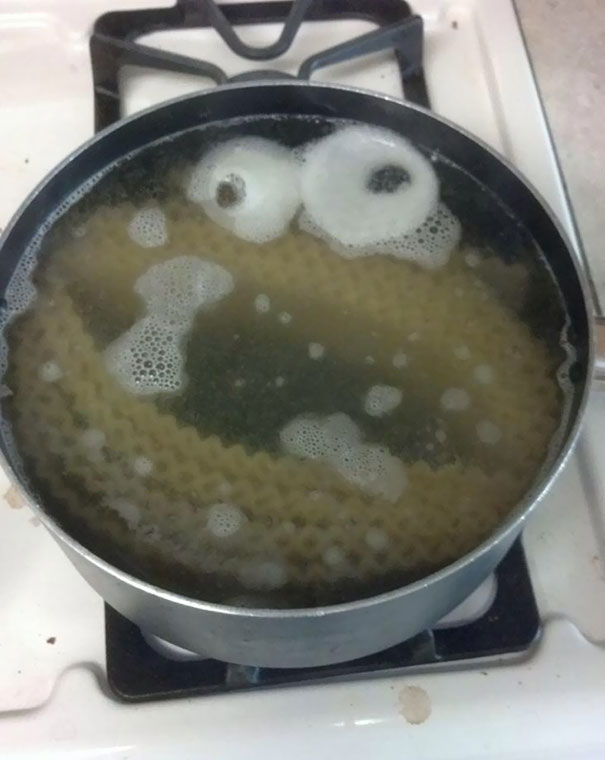 This is a coincidence, but who watched this first? I wait for the pasta to get ready as fast as possible.

9. Someone Found This Carrot Hand at his Farm Today 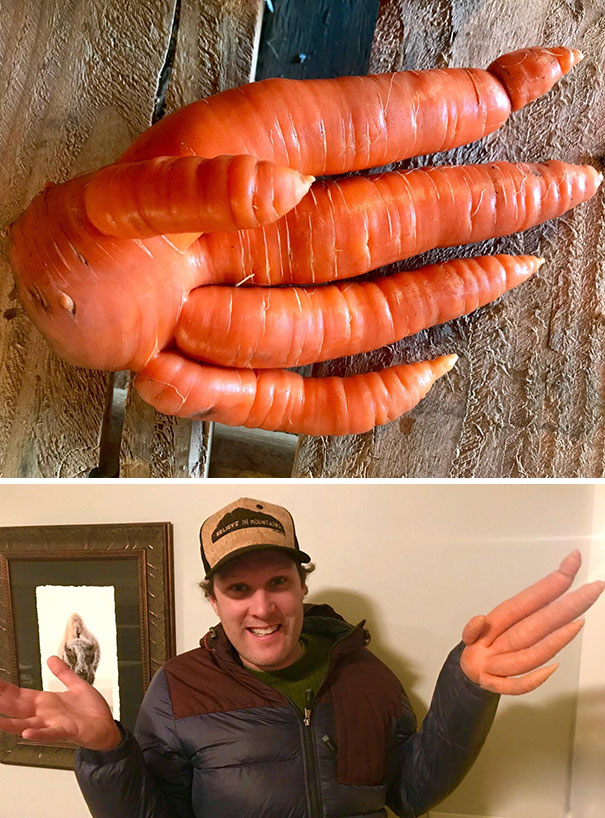 Do you like playing pranks? If so, how about trying this carrot hand to scare your friends? 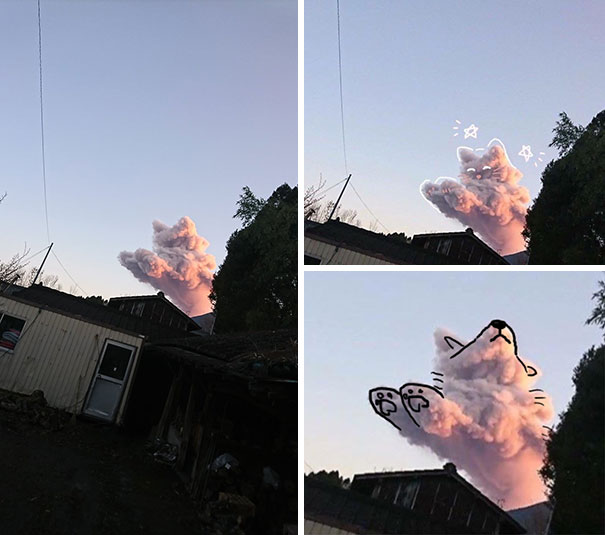 I think the artist was bored by drawing his shapes and came up with the idea of creating something new out of clouds. That man is so creative. He made both- a dog and a cat.

11. I Guess! Someone is Peeking from a Window 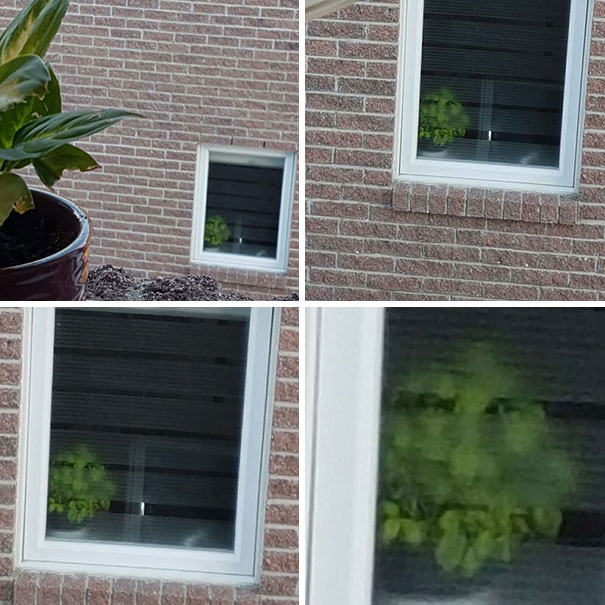 Look at the picture- it is not a person, but is a plant playing hide and seek. But it looks like a human face, and it's scary.

Here is another picture of a tree that resembles a human face. 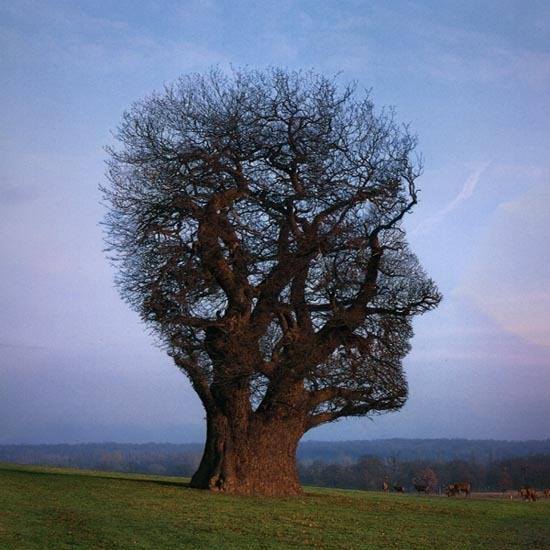 12. The Water Thrown on Elephant Resembles an Elephant 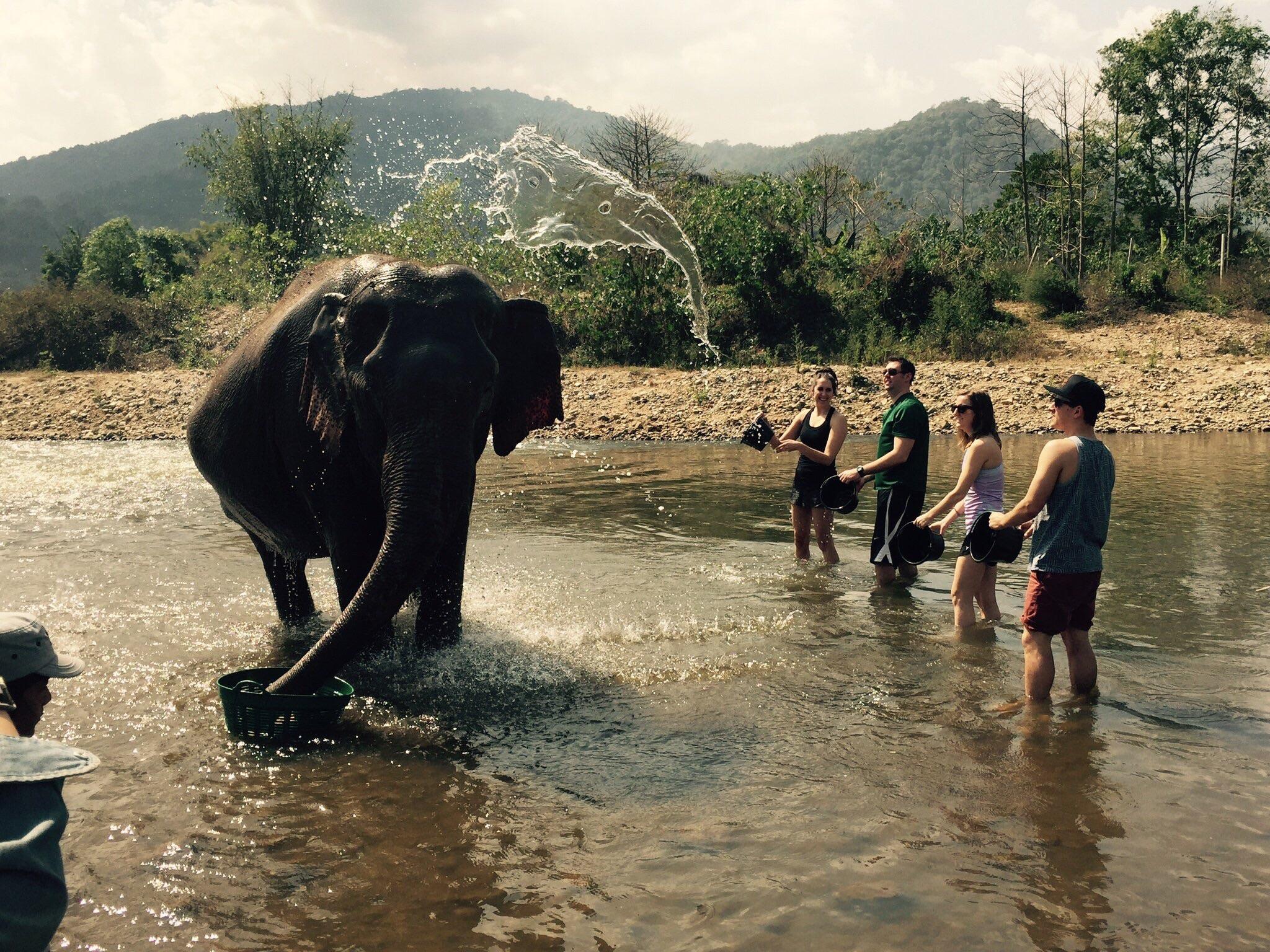 This is a coincidence. But so much resemblance is making me think. 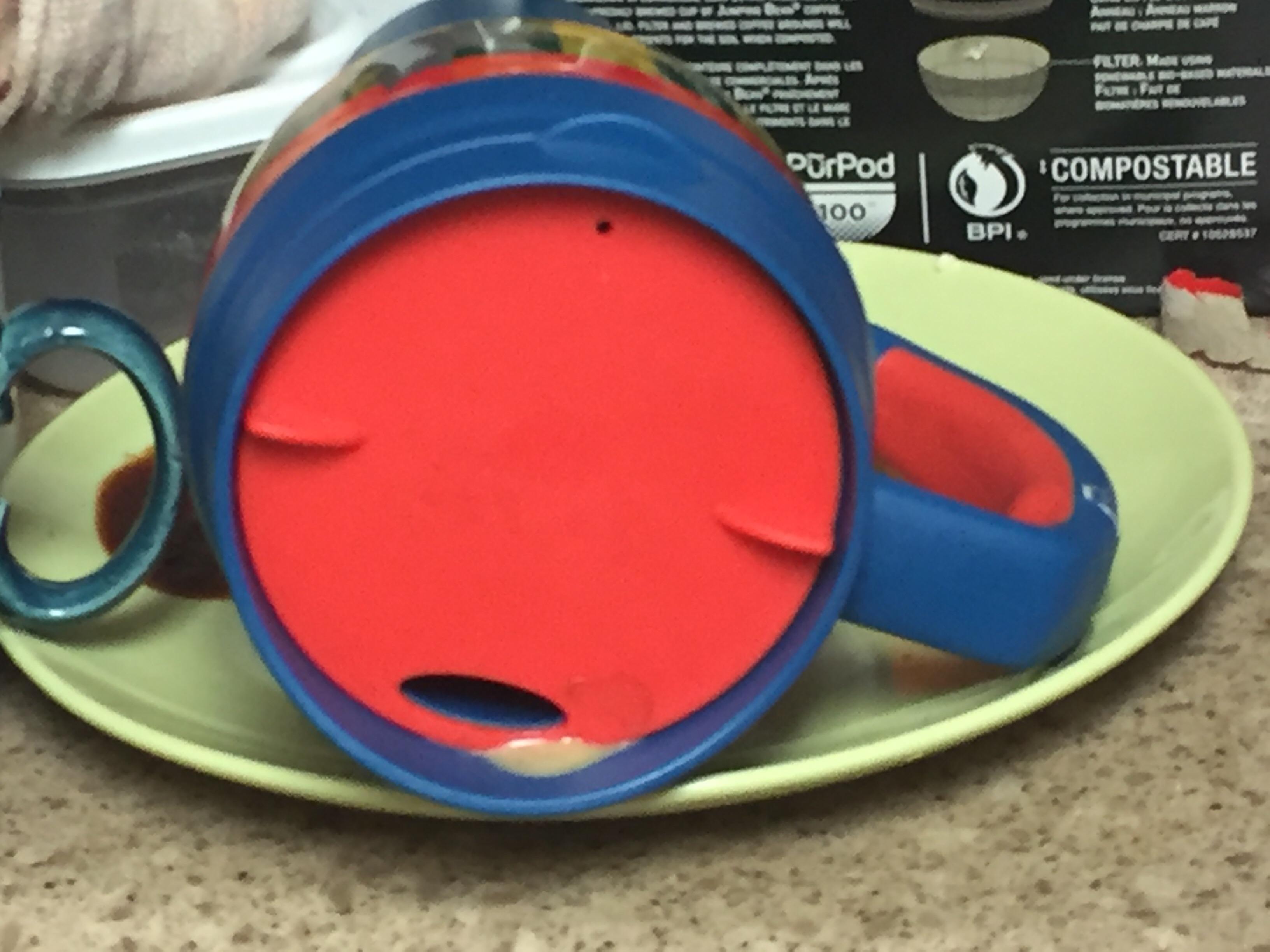 14. That Scary Shadow of Lamp 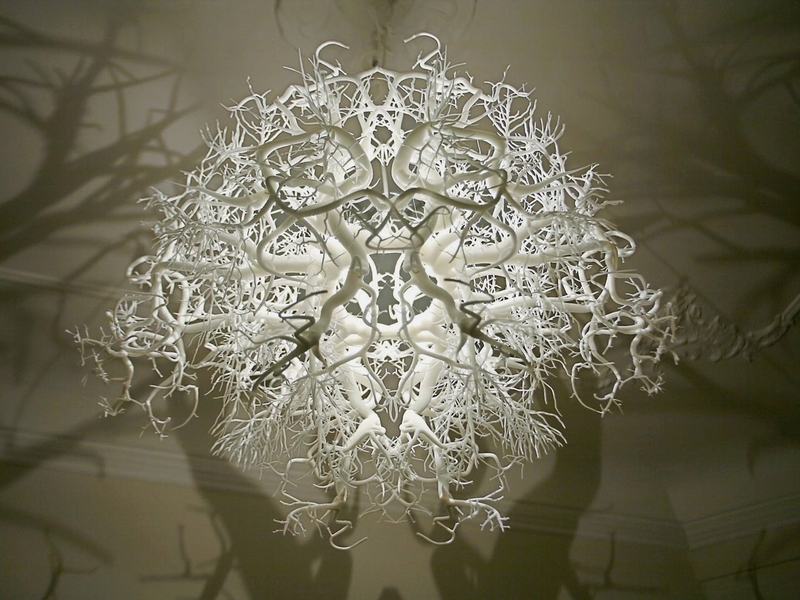 15. Oops! It Looks like Someone has Hanged Himself (Gingerbread) 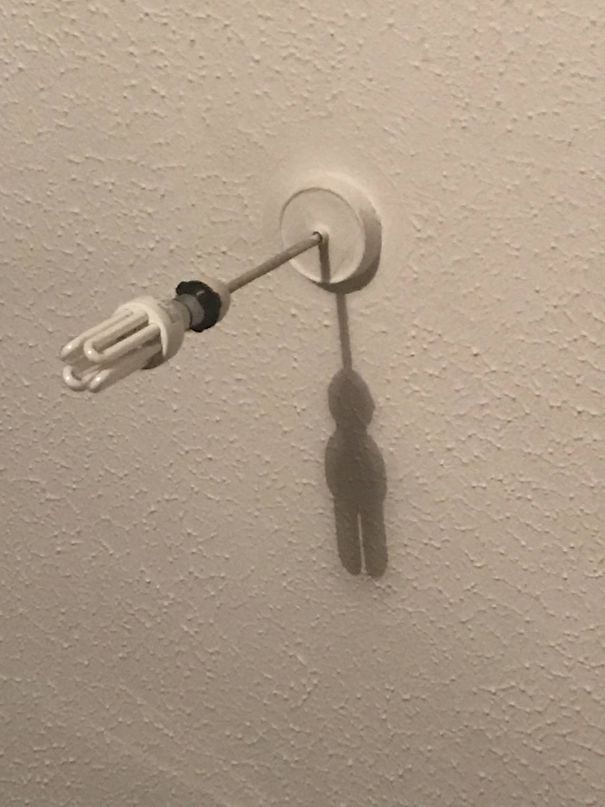 16. These are not Monsters, Standing to Threaten You. These are Closed Parasols on the Beach. 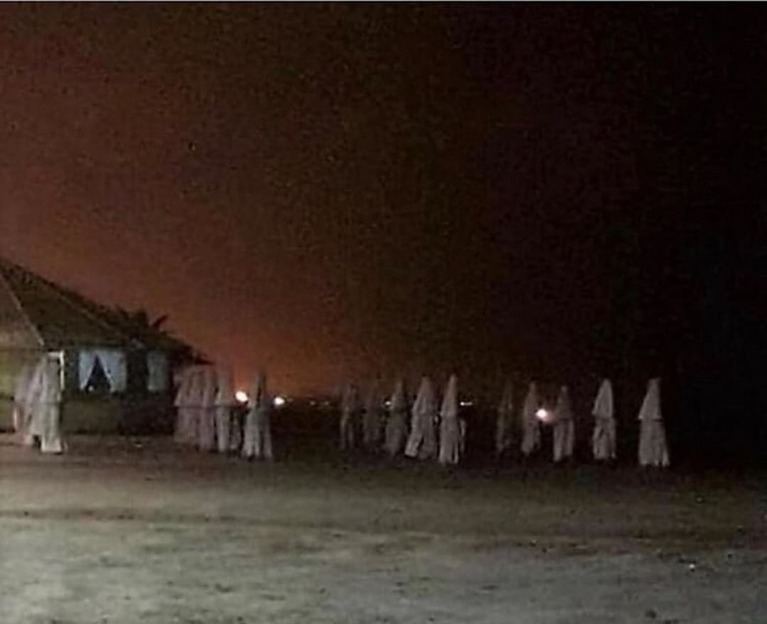 17. This Makeup Squirt Which Resembled a Cat 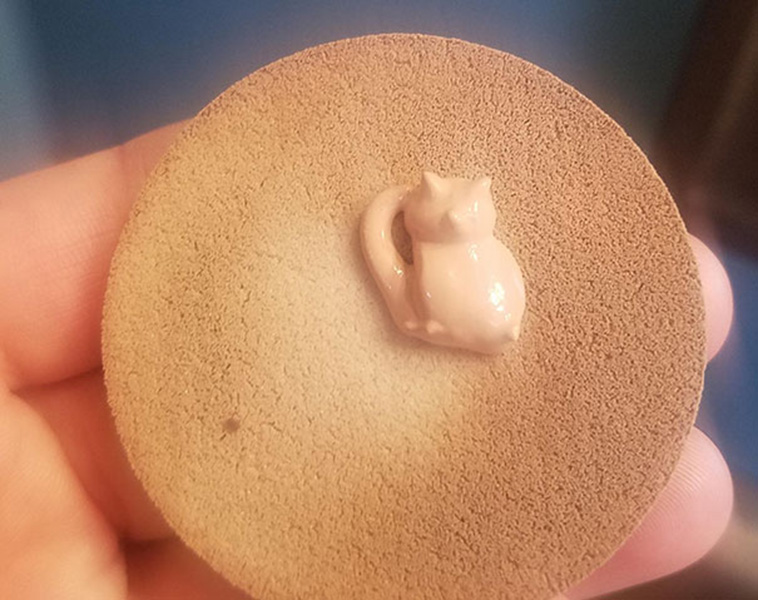 How is Pareidolia Related to Psychology?

Do you know pareidolia plays a key role in psychology? This may sound weird, but it is true. Some psychologists use the Rorschach inkblot test to identify a person’s hidden emotions. They take an image that is created by dropping ink on the paper. Paper is then folded into half, and the patient is asked to assume the resulting image. It is believed that people describe their innermost thoughts that relate to the image.

This phenomenon also arises in computer vision. It is usually noticed in image recognition programs. In the case of an artificial neural network (in this, computer system learns to perform tasks without being programmed with any rules), higher-level features react to other features which in turn brings out what the computer sees. This reflects the images that the network has seen previously.

It is believed that people who are more religious experiences more pareidolia. But studies explain that neurotic people and people who usually have negative moods are more prone to this phenomenon. It is also a sign of good judgment taken in a dangerous situation.

Have you ever experienced the same? Which picture did you saw and where? Drop your comments below.