10 Treasures Found By Accident Which You Wish You Could Own

When you were dreaming of becoming a top scientist, some wished of becoming an archaeologist to discover hidden treasures. 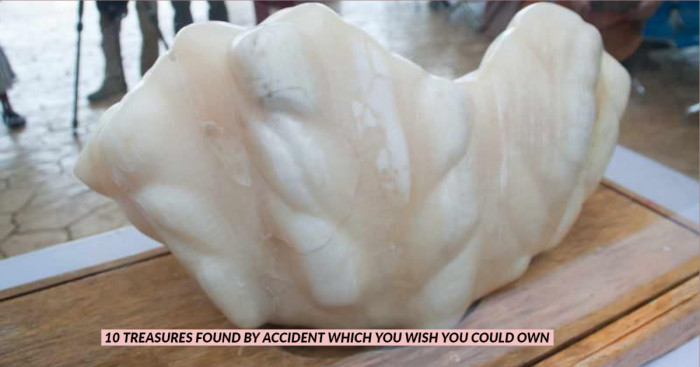 What would be your reaction if a random person comes and says ‘you are very rich’? I don’t know how will you react, but I would surely think of visiting an ENT specialist. The story of finding lost treasures always attracts people. Be it an old painting or a wooden box; there’s something about the treasure that keeps people fascinated.

Lucky are those whose grandfathers or ancestors had kept diamonds and gold coins safe for their grandsons. I know you are not the lucky one, so let us read about some important inventions and discoveries which were found by accident.

Here is the list of accidental discoveries which attracted millions from across the world.

1. Original Copy of the Declaration of Independence 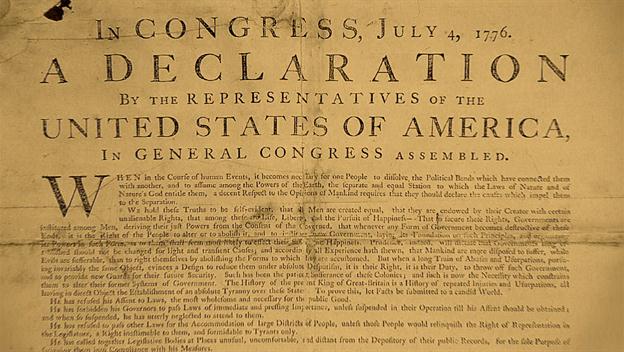 A man purchased an old painting from a flea market in Adamstown, Pennsylvania thinking that he would fix it and hang it in his room. Little did he know that he would use it as a decoration for his home. But when he removed the canvas, he noticed a paper stuffed in it. He opened the paper and couldn’t believe that it was the original copy of the Declaration of Independence dated 1776. This unique discovery was announced in 1991, but the finder’s name is kept anonymous. In the same year, the manuscript was auctioned for $2,420,000 at Sotheby’s.

2. Diamonds Hidden in a Chair

While you sell the old chair, paintings or other items that are of no use, the couple Angela Milner Brown and Angus became rich by purchasing an old chair at $7 at an auction. Yes, you read it right. The couple from Scotland discovered jewelry worth $7000 hidden inside an old chair which they purchased at an auction.

I can’t believe this is true! How can one become rich just by spending $7? I am jealous.

3. The World’s Largest Pearl and a Good Luck Charm 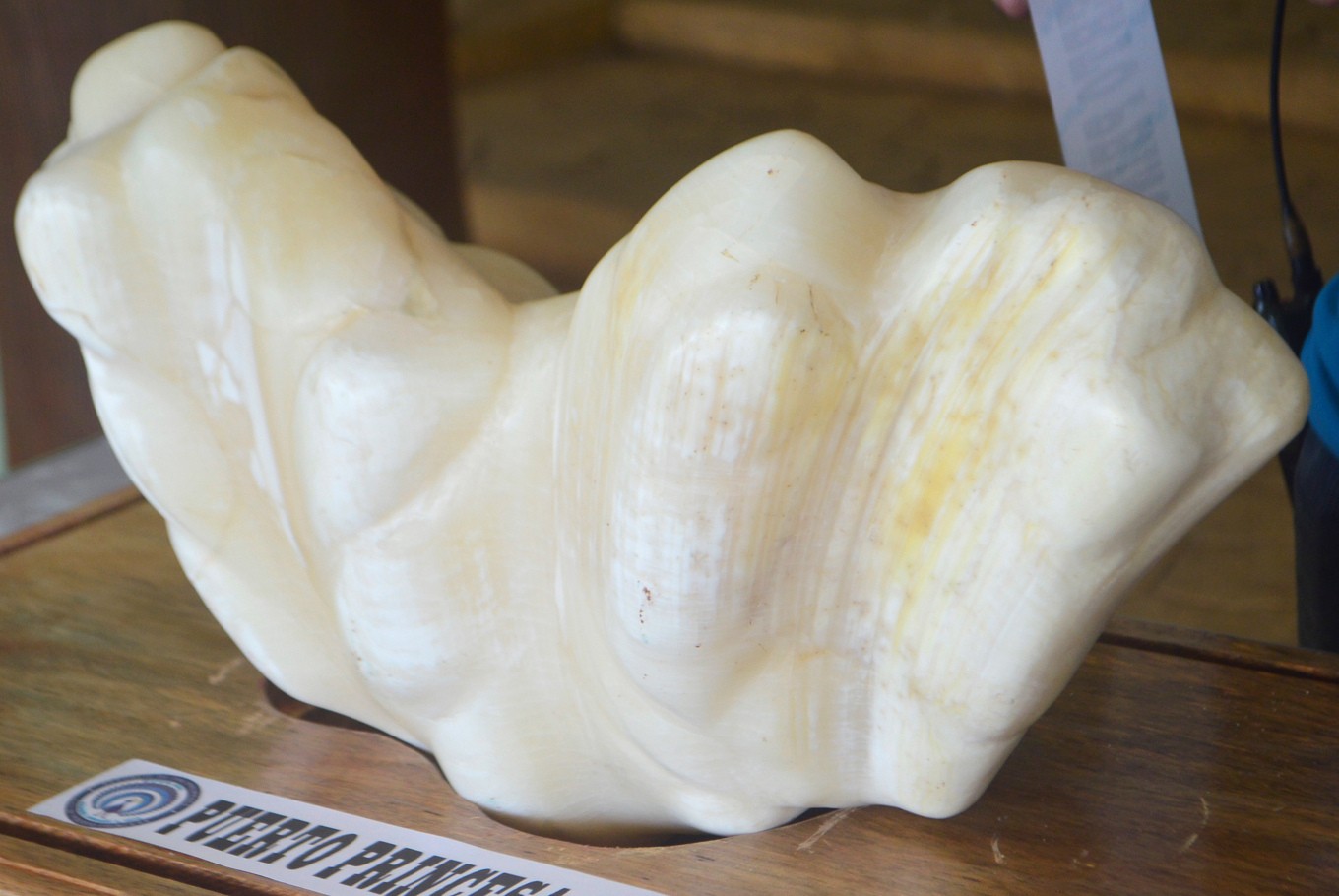 A Philippines fisherman found the world's largest pearl at the coast of Puerto Princesa. He kept the pearl for a decade as he believed that the pearl is his good luck charm. The fisherman didn’t know the value of this 34kg pearl until he passed the pearl to his aunt and a tourism officer. His aunt, Aileen Cynthia Maggay – Amurao found that the pearl’s value should be of US $100m.

She offered the pearl to the mayor to serve as the attraction to the tourists. Currently, the pearl is on display in the atrium of the New Green City Hall in Puerto Princesa. She even encouraged the locals of Puerto to spread the word about this largest pearl. So next time, when you plan to visit Puerto, don’t forget to click a picture of this accidental finding.

4. Wooden Treasure Chest in a Forest

The team of metal detecting enthusiasts has attracted millions across the globe by sharing their unique findings on their channel on YouTube. The group from the Netherlands has found many interesting things but, the one that attracted the most is a big wooden treasure chest that they discovered in the middle of a forest. Unfortunately, the contents of the box are still behind the curtains because they have never revealed what’s inside the box in their video.

We are desperate to know what’s inside this secret box. Are you?

The team also uploaded a video on how they found the treasure chest. Check the video below.

Source - "Metaldetecting in The Netherlands" 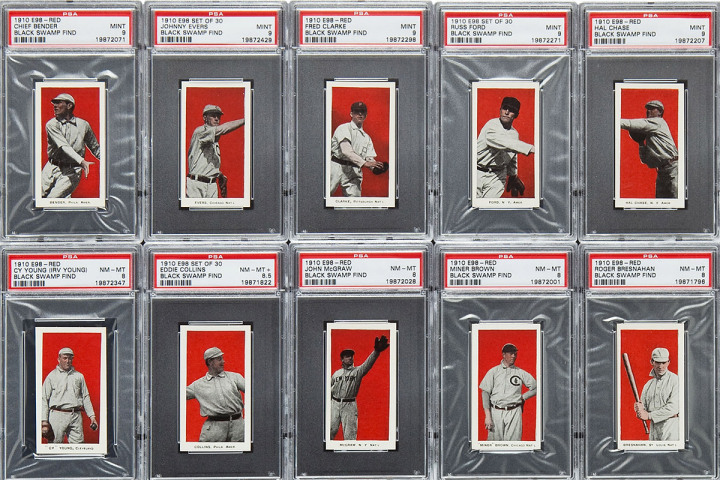 It was in February 2011 when Karl Kissner found 700 rare baseball cards in a box kept in his home. The cards belonged to his grandfather Carl Hench who died in the 1940s. Later, the experts described the collection of baseball cards as -

“The biggest, most exciting find in the history of sports card collecting, a discovery probably worth millions.”

The collection might bring $3 million to Carl’s family. The family decided to sell a few cards during the National Sports Collectors Convention in Baltimore. They believe that Carl might have received these cards as a promotional item from a company.

What they did with the remaining cards is still a mystery.

6. The Painting of Mona Lisa Stolen by a Man 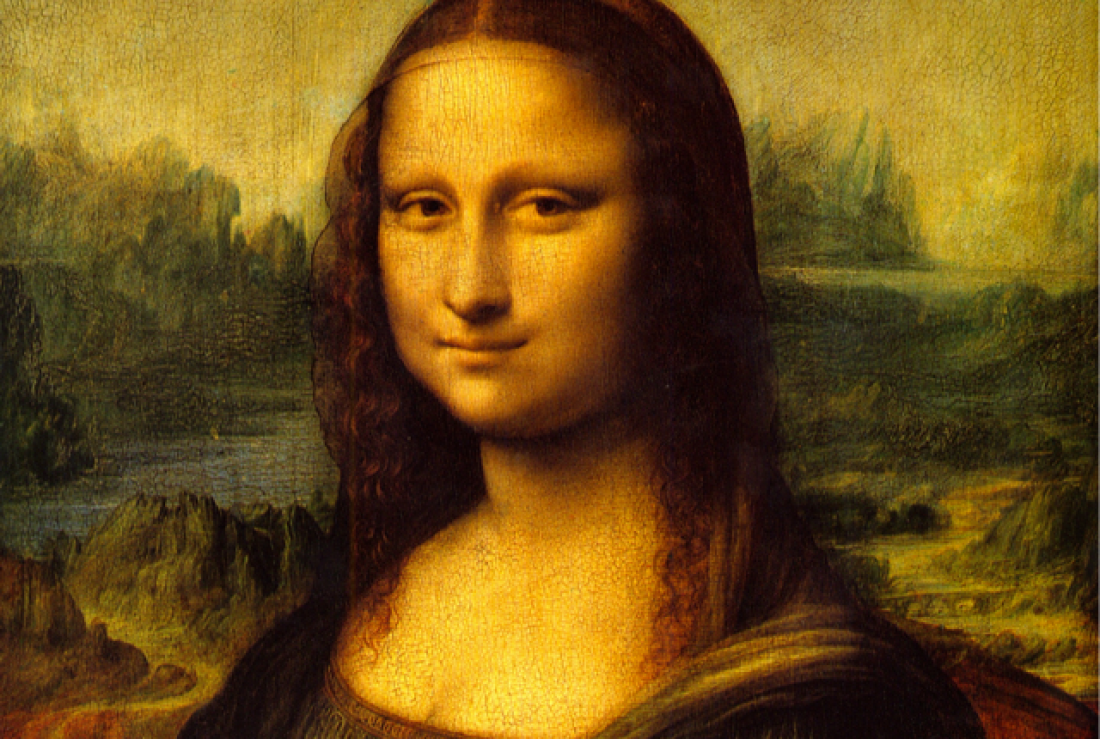 It was in 1911 when a man stole the ‘Mona Lisa’ painting off a wall from the Louvre Museum in Paris. Painted by an ace artist Leonardo da Vinci, his work went on display at the museum in 1797. The robbery of this beautiful painting became international news and young Pablo Picasso and art collector J. Pierpont Morgan became the suspect in the case. But for the two years, the cops didn’t get any clue for this lost treasure.

Later in 1913, an art dealer received a letter from a man who claimed to have the painting and wanted to return to its place. Vincenzo Peruggia, an Italian painter, brought this painting to him and showed it to the art dealer and director of the Uffizi Gallery. Vincenzo has worked previously at the Museum and said that he stole the painting for patriotic reasons and was also interested in a reward. In January 1914, the painting was kept back at the Louvre Museum. 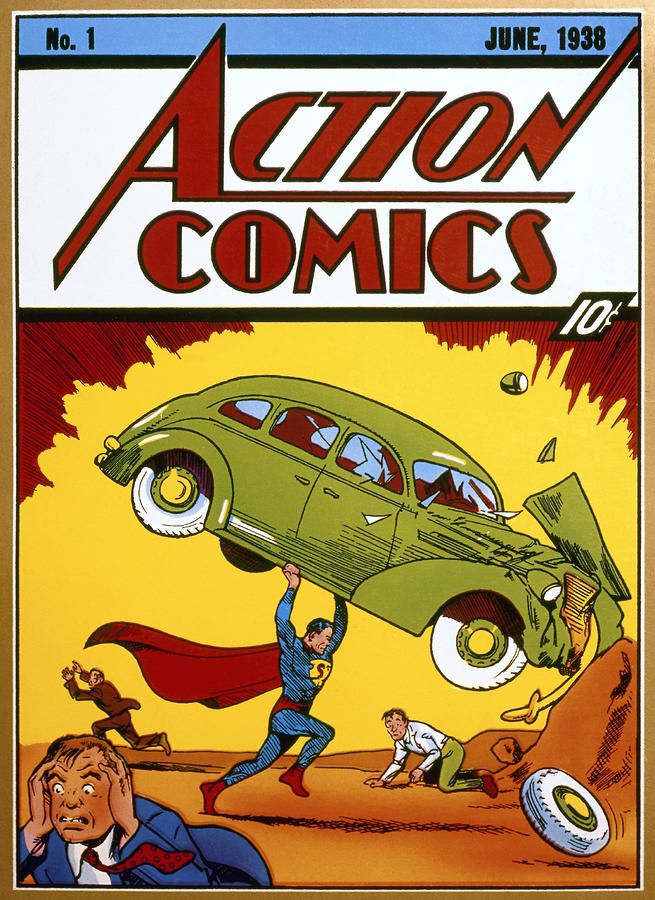 Do you remember when did you first read Superman comic? Do you know when was the first edition of action comic of Superman was published? It was published in 1938. This rare edition of the comic book was found hidden in a Minnesota home in 2013. While doing renovation, the contractor found the book among newspapers which were used as insulation in the walls.

After this discovery, the book was purchased for $175,000 by an unknown buyer. Unfortunately, the contractor David Gonzalez had torn the back cover of the book, which cost him around $50,000 of the total price. Don’t you think the contractor should share the amount with the owner of the house?

Superheroes are loved by people of all ages. But sometimes the obsession of becoming like a superhero doesn’t stop. Can you believe this man from the Philippines underwent 23 surgeries to get the Superman-like look?

Tell us which is your favorite Superhero? 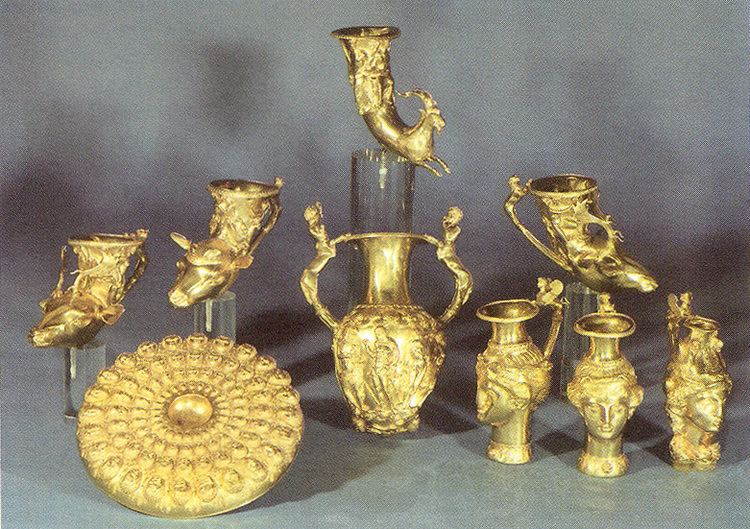 The Panagyurishte is considered to be the richest treasure ever found by three brothers – Michael Devkovs, Petko and Pavel. They accidentally found this treasure during clay digging near the town of Panagyurishte. The gold has been dated to the 4th century and consists of 9 solid gold vessels.

This treasure is not known for its weight but also its shape and ornamentation. The first thing they found was a ceremonial drinking horn. Other Panagyurishte treasures found were several dishes, a vase, and golden decanters, seven rhyta, different anthropomorphic figures, all of which were thought to be used in religious rites. Currently, the treasures are displayed at several museums around the world as one of the best artifacts of Thracian culture.

However, the original piece is kept at the National Museum of History in Sofia. This accidental finding confirms that the ancient Greek writers, besides, the wine and horses also loved ornaments and gold most of all.

Do you want to know how much this treasure costs? It is priceless.

9. $182,000 in Depression-Era Currency Found Inside a Bathroom Wall 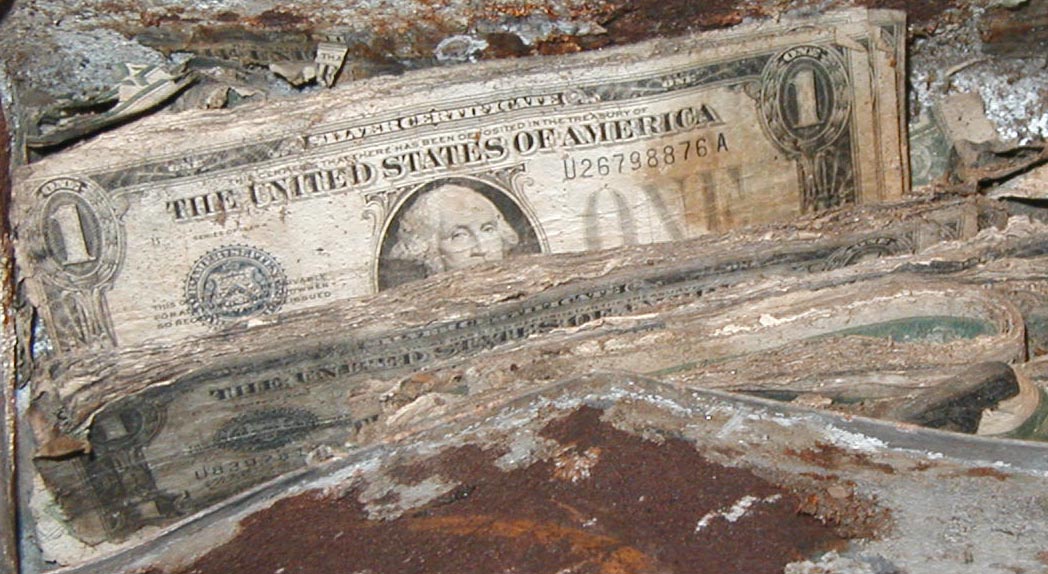 The remodeling contractor Bob Kitts accidentally found $182,000 behind the walls of the bathroom when he was repairing it. Inside the walls were envelopes with a return address “P. Dunne News Agency.” Maybe a businessman named Patrick Dunne kept his money safe at his secret place. After discovering this, the contractor told the homeowner Amanda Reece. Legal issues arose between the two who should keep the money. Kitts claimed the money as his own. So who got the amount? Unfortunately, both lose the case.

"If these two individuals had sat down and resolved their disputes and divided the money, the heirs would have had no knowledge of it. Because they were not able to sit down and divide it in a rational way, they both lost.”

I am still wondering why the two decided to take the court’s help. They would have shared the amount equally. 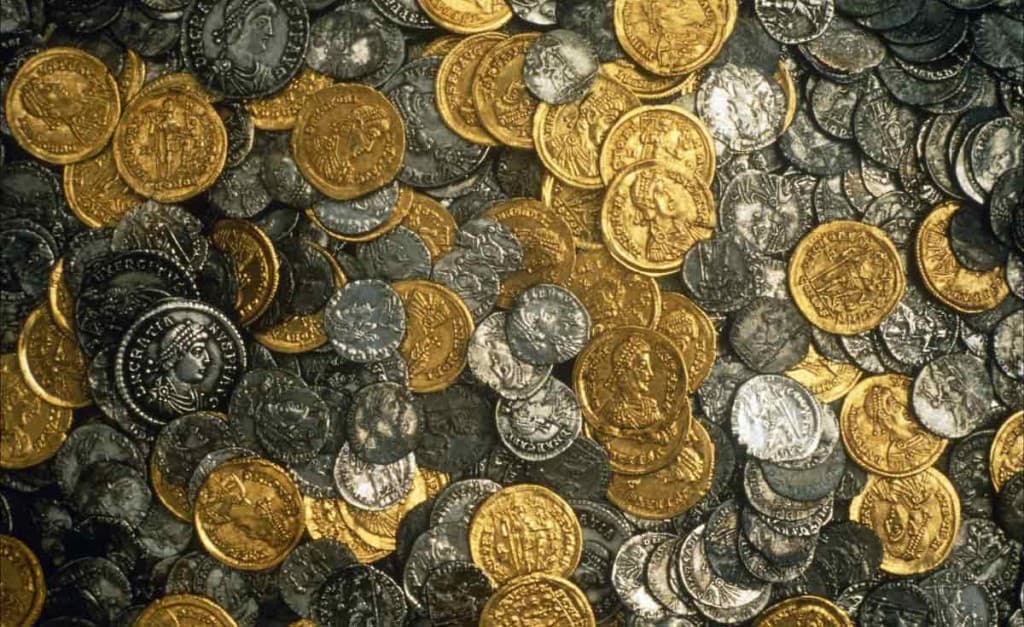 In 1992, the Hoxne treasure was discovered when a farmer lost his hammer in a field in England. He asked his friend to search for it using a metal detector. While he was searching for his hammer, he came across a treasure that contained gold and silver coins.

The gold coins were all solid and ninety percent pure. Apart from coins, there were silver tableware and jewelry. The two reported their findings to the authorities who then paid nearly $2.5 million to them before taking the treasure to a museum.

When I was a kid, I believed that treasures exist only in novels and fiction. But after reading about these hidden treasures and accidental findings, I am desperate in finding one for myself.

Throughout history, several treasures have been stolen or gone missing. Be it an attic, forest or sea, treasures can be found anywhere. Here are the strangest things that are discovered under the sea. Do you have any clue about lost treasures? If yes, tell us, we can help you with finding treasures.;)

Can you imagine yourself finding a box full of diamonds and ancient things while resting on a bench in the park? What would you do with the bag - search for the owner or keep it with you. Also, tell us if you own or know anyone who has found the treasures by accident. Drop your comments below.