Rosicrucianism is a secret society which is said to have been formed in late medieval Germany. Christian Rosenkreuz is claimed t... 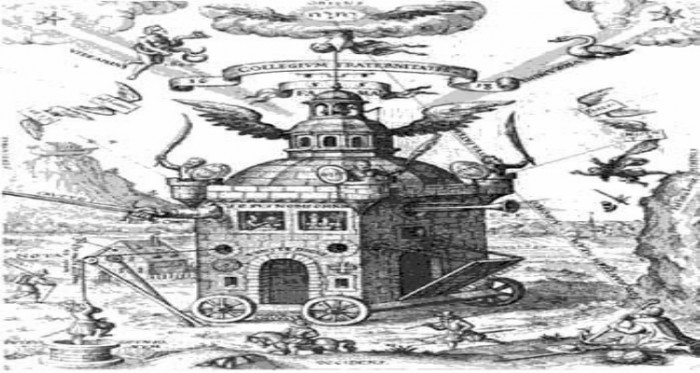 Rosicrucianism is a secret society that is said to have been formed in late medieval Germany. Christian Rosenkreuz is claimed to have laid the foundation of this society. The society holds a doctrine or theology based on arcane truths of the ancient past which are kept secret from the common masses. These truths offer an understanding of the universe, nature, and human inhabitants.

Rosy Cross- The Symbol of Rosicrucianism

The name of the society ‘Rosicrucianism’ is derived from the Rosy Cross or Rose cross (a cross having a rose at the central position) which is also its symbol. The symbol can also be found in some rituals beyond “Craft” or “Blue Lodge” Masonry.

The Three Manifestos & Origin of Rosicrucianism

During 1607-1616, Rosicrucians’ teachings and origins were described in three anonymously published manifestos. The manifestos have been attributed to a Lutheran theologian and teacher named Johann Valentin Andreae. The name of these three manifestos is Fama Fraternitatis RC (Fame of the Fraternity of Meritorious Order of the Rosy Cross), Confessio Fraternitatis (The Confession of the Rosicrucian Fraternity), and ‘The Chymical Marriage of Christian Rosenkreuz’. The third manifesto gives an account of the travels of the alleged founder of Rosicrucianism  ‘Christian Rosenkreuz’ who is now considered to be a fictional character and not some real individual.

According to the manifestos, Christian Rosenkreuz was born in 1378. He visited North Africa and the Middle East in search of secret wisdom. Post his visit, he came back to Germany and organized the Rosicrucian order in 1403. He went on to establish a sanctuary in 1409 where he was buried after his death in 1484. 120 years later, the alleged tomb was discovered and this resulted in the public announcement of the order’s existence.

The Rosicrucian order is regarded as an inner world order among many of the earlier and modern Rosicrucianists which comprises of great “Adepts”. When the consciousness of these “Adepts” is compared to that of human beings, the former has the consciousness similar to demi-gods. This “College of Invisibles” is considered to be a permanent source responsible for the development of the Rosicrucian movement.

The Secret Doctrine of the Rosicrucians

The Secret Doctrine of the Rosicrucians is a complete body comprising of occult folklores and esoteric teachings which is passed on from generation to generation. The secret doctrine has almost never been exposed to the public in print or committed in writing until the present generation. Prior to this, not much has been written or printed related to this body of teachings and were concealed with obscure terms of astrology and alchemy. The references made in the ancient book about sulfur, mercury, and other chemical elements and "The Philosopher's Stone” were intended to demonstrate the teachings of the Secret Doctrine to those who knew about it.

In the early 1600s, the whole of Europe got thrilled by the manifestos and declared the existence of secret brotherhood among sages and alchemists who were preparing to bring about a transformation in the religion, arts, science, political and intellectual scenario of Europe.

During 1614-1620, nearly 400 manuscripts and books got published that talked about the Rosicrucian documents.

In 1622, the "Rosicrucianism furore" was at its zenith when two mysterious posters were seen on the walls of Paris within a gap of few days.

"We, the Deputies of the Higher College of the Rose-Croix, do make our stay, visibly and invisibly, in this city (...)".

And the second one ended with these words-

"The thoughts attached to the real desire of the seeker will lead us to him and him to us."

The first manifesto ‘Fama Fraternitatis RC’ served as an inspiration for the works of many including Michael Maier, Julius Sperber, Thomas Vaughan, and others. In Elias Ashmole's Theatrum Chimicum britannicum (1650) he defends the Rosicrucians.

King of Hungary, Rudolf II (Holy Roman Emperor), and King of Bohemia appointed Michael Maier as the Pfalzgraf (Count Palatine). He was also a notable defender of the Rosicrucians, giving clear details about the "Brothers of the Rose Cross" in his writings. Maier assertively said that the Brothers of R.C. exist for the advancement of inspired arts, science, and alchemy.

Henricus Neuhusius wrote, in his 1618 pamphlet ‘Pia et Utilissima Admonitio de Fratribus Rosae Crucis’, that the Rosicrucians left for the east because of the European instability caused by the beginning of the Thirty Years' War.

Sigmund Richter, who was the founder of the secret society of the Golden and Rosy Cross, also suggested the same in 1710. In the first half of the 20th century, an occult researcher René Guénon had put forward this same idea in a few of his works. However, a prominent author of 19th century Arthur Edward Waite contradicted this idea by putting forward some arguments. Due to this productive discourse, many Rosicrucian societies began to exist.