Heracles is one of the most famous Greek mythological heroes. He was born as Alcaeus or Alcides. Like most other heroes, one of ... 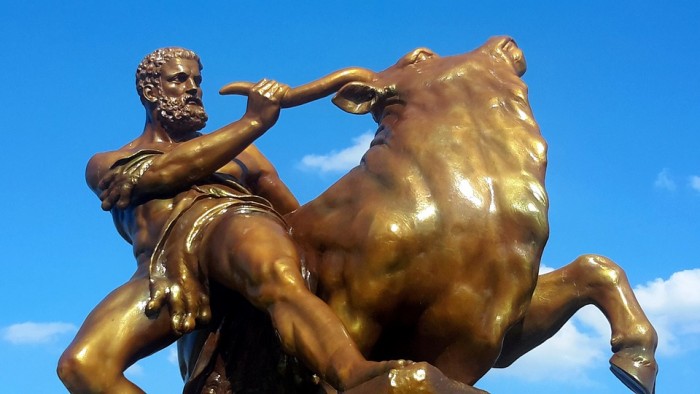 Heracles is one of the most famous Greek mythological heroes. He was born as Alcaeus or Alcides. Like most other heroes, one of his parents was god. He was born to the sky and thunder god Zeus and the mortal mother Alcmene.  Heracles was the foster son of Amphitryon. Perseus was his great grandfather and half-brother.

Heracles was the greatest of Greek heroes and a paragon of masculinity. He is known for his courage, extraordinary strength, ingenuity and sexual preferences for both male and female. At places where his strengths did not suffice, he used his wits to handle the situation.  Wrestling the giant Antaeus, laboring for the king Augeas of Elis and tricking Atlas into taking the sky back onto his shoulders are some of these instances. His iconographic attributes are lion skin and club (weapon).

The co-patron and co-protector of palaestrae and gymnasia was also very emotional and passionate. He was a great friend. His friendship instances have been sighted through deeds like restoring Sparta to his friend Tyndareus or wrestling with Thanatos on behalf of Prince Admetus. Heracles was a terrible enemy as well. Augeas, Neleus and Laomedon have been the examples of his horrible vengeance.

There is also a Roman version of Heracles. Hercules is a prevalent name of Heracles in Rome and Modern West. Romans adopted his life and work by adding some details of their own. They also linked him with the geography of Central Mediterranean.

Conspiracies Behind The Birth Of Heracles Goddess Hera, wife of Zeus had always hated Heracles. She tried to kill him as an infant. This hatred arose because Heracles was the outcome of Zeus’s love affair with Alcmene, who also later disguised himself as her husband. Thus, Heracles existence is one of Zeus’s illegitimate affairs and Hera conspired against him as part of her revenge for husband’s infidelities.

The day Zeus made love to Alcmene, Amphitryon returned early from war and so Alcmene became pregnant with his son at the same time (a case of heteropaternal superfecundation, where woman carries twins sired by different fathers). Thus, the twins Heracles and Iphicles were born.

When these twins were to be born, Hera persuaded Zeus to swear on an oath- the child born to a member of the House of Perseus that night would become High King. Once the oath was sworn, Hera hurried to force the goddess of childbirth Ilithyia to slow down Alcmene’s birth by sitting cross legged inside her causing the twins to be trapped in womb. While this happens, Hera would cause premature birth of Eurystheus, making him the High King. This would have come to reality if Alcmene’s servant had not fooled Ilithyia saying that Alcmene has delivered. Ilithyia jumped in surprise which loosened the knots and Alcmene delivered. 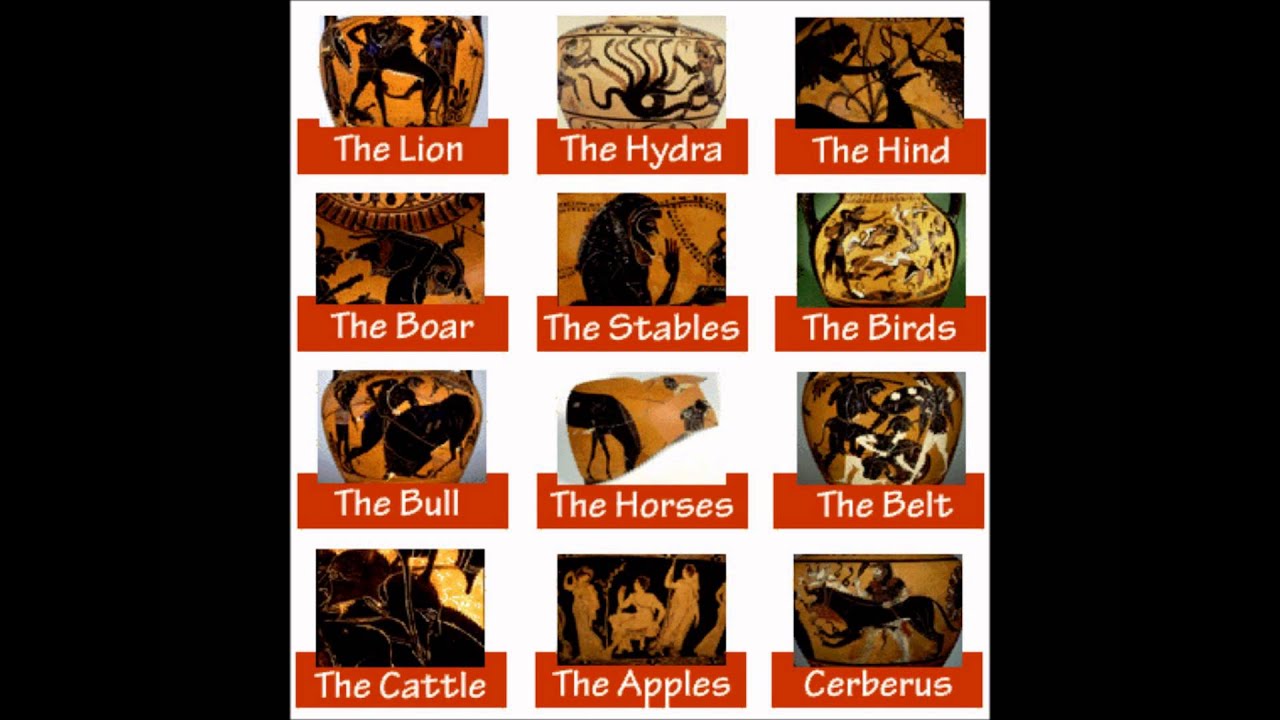 Labours Of Heracles are twelve episodes concerning the sins carried out by Heracles.

Eurystheus had become the king in place of Heracles and he had to accomplish ten labours at the service of his new king. If he succeeded, he would be purified and be granted immortality. Heracles accomplished them but Eurystheus did not accept one of them and so he had to accept pay for his labour. Eurystheus set two more tasks which Heracles performed successfully and so the number went to twelve.

3. Capture the Golden Hind of Artemis.

5. Clean the Augean stables in a single day.

8. Steal the Mares of Diomedes.

9. Obtain the girdle of Hippolyta, Queen of the Amazons.

10. Obtain the cattle of the monster Geryon.

11. Steal the apples of the Hesperides (he had the help of Atlas to pick them after Hercules had slain Ladon).

12. Capture and bring back Cerberus. According to the Sophocles's Trachiniae and Ovid's Metamorphoses Book IX, Heracles wrestled and defeated the god of Acheloos River, Achelous and took his wife Deianira. While travelling to Tiryns, Nessus who is a centaur helps Deianira across a fast flowing river while Heracles is swimming through it. He tries to steal away Deianira and the angry Heracles shoots him. For taking revenge, Nessus gives his blood-soaked tunic to Deianira before he dies, telling her that it will "excite the love of her husband".

Years later, Deianira hears rumors about a rival love for Heracles. Remembering Nessus’ words gives the blood stained shirt to Heracles which is delivered to him by Lichas, the herald. The blood poisons Heracles, tears off his skin and exposes his bones. Before dying, Heracles throws Lichas into the sea thinking him to be the culprit. Heracles then uproots several trees and build a funeral pyre on Mount Oeta. As the body burns, only his immortal side is left. Heracles rises to Olympus through Zeus' apotheosis.

According to Herodotus, Heracles lived for 900 years.

Heracles In Other Culture Heracles was transmitted to far east via the Greco-Buddhist culture.

While Sallust wrote about Jugurthine War, he mentioned that Heracles dies in Spain according to the belief of Africans.

Temples have also been dedicated to Heracles in the Mediterranean coastal countries. Heracles Monoikos (i.e. the lone dweller) is an example. It is built upon a promontory, very far from any nearby town.

There is also a story that Heracles set up two massive spires of stone for stabilizing the place and ensuring ships’ safety between two landmasses. This place is the gateway from Atlantic Ocean to the Mediterranean Sea. Here, the northernmost tip of Morocco and southernmost tip of Spain face each other. It is referred to as Pillars of Hercules/Heracles.

10 Of the Greatest & Inspirational Indian Speeches In History - Video