Owl Raised a Duckling as its Own: A Rare & Hard-to-Believe Incident

Have you ever heard that a duck has a Mumma owl to take care? No, right? So, scroll down and know about this duckling who got raised by an owl. 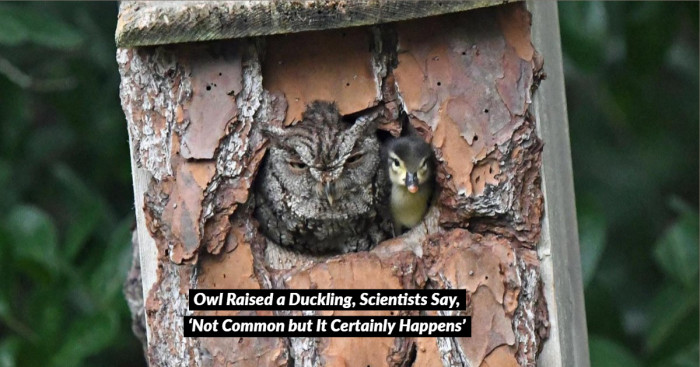 I know this sound exactly like a tale from the pages of a 2nd standard storybook. But, it is not! Yes, this bizarre real-life partnership is not only a story but also been captured by a photographer from Jupiter, FL in their backyard.

How She Found Out? 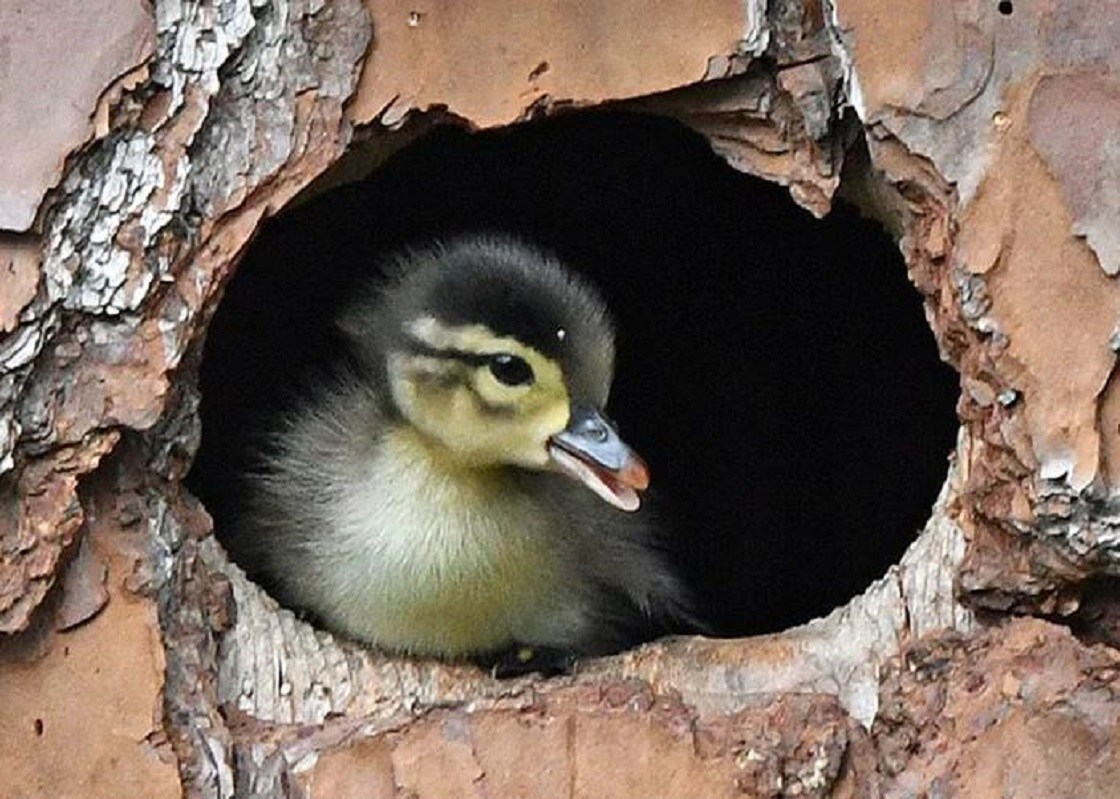 Here we are talking about Laurie Wolf from Jupiter, a town in Florida. It was about the time when she was inspecting all the different birdhouses or nesting boxes she and her family have put together in their backyard.

There she noticed when a mother wood duck moved her egg from one box. At first, she thought an eastern screech owl that lived in a tree nearby her house had chicks of her own or owl hatchlings.

However, on closer examination, it became clear that it is not a chick of the owl, but that cute yellow bird peeking out next to their nest-mate was, in fact, a little duckling. And after noticing for hours or more, she got to know that little duckling is not only roaming around but, the owl was raising the duckling as its own.

In an interview with Bored Panda, Laurie told,

“The mother duck removed the egg from one of our nesting boxes and flew toward this other box with it in her bill.”

“We believe that the duck moved the egg because that nest had been raided – there were eggshells at the bottom of the pine tree where the box is.”

Then she said in the interview that they saw an owl in the same box.

“A day or so after we saw that, a screech owl moved into that box.”

But, she continued that even a month later, the ducking appeared in the box with the owl.

“Seeing the owl with the duckling was honestly the most amazing thing I’ve ever seen in my life! It’s still hard to believe.”

However, the woman contacted a bird expert because she got anxious that the predatory owl might eat the duck chick. Well, it turned out that fear of Laurie towards duck chick was right

as bird expert also agreed that it might happen.

Well, one of the wildlife sanctuary in her area also agreed to look after the duck chick if Laurie caught it. But, the bird jumped out of the nest box and ran away to a nearby pond when Laurie attempted to capture the bird.

“A bit later, the baby duck was in the hole by itself, calling for the parents.”

Later in the interview, she said,

“We believe they heard each other because it suddenly left the box and made a beeline for the back fence and our neighbor’s pond where the woodies have been hanging out.
Also, we had seen a female wood duck – about three or four weeks ago, remove a duck egg from a box that had been raided by something, and fly off toward this box with it.”

“We lost it in the trees and didn’t want to disturb it. But we believe she put it in this box and the owl hatched it.”

However, Laurie and her family haven’t seen the duckling ever since.

“The pond nearby is on our neighbor’s property and is very hidden.”

Is it a Common Incidence? 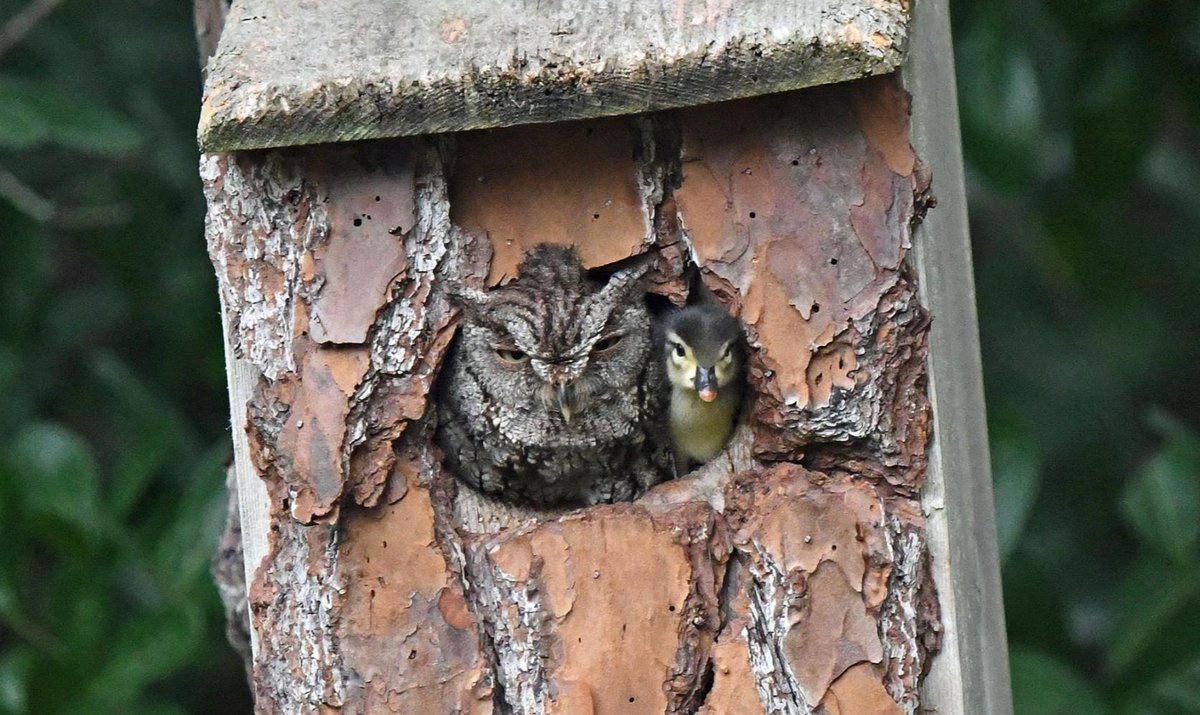 “I don’t think I’ll ever experience anything like that in my life again.”

But it’s possible! Yes, because this is not something new as wood ducks have been seen living with eastern screech owls in the past as well, according to National Geographic. (1.1)

The Manitoba Director of Bird Studies Canada, Christian Artuso, also made the same observation back in 2005 while he was studying eastern screech owls for his Ph.D.

“It’s not commonly documented, but it certainly happens.”

Wood ducks are known to practice brood parasitism. It means mother ducks will sometimes lay an egg or two in someone else’s nest, for example, some other closely related species or another wood duck.

“You could think of it as not keeping all your eggs in one basket.
If you spread your eggs out, then your chances of passing on your genes are increased slightly, especially if you lose your own eggs to a predator.”

“We know this occurs, but we really don’t know the frequency
So I was happy to see another example of this.”

Why Did it Happen? 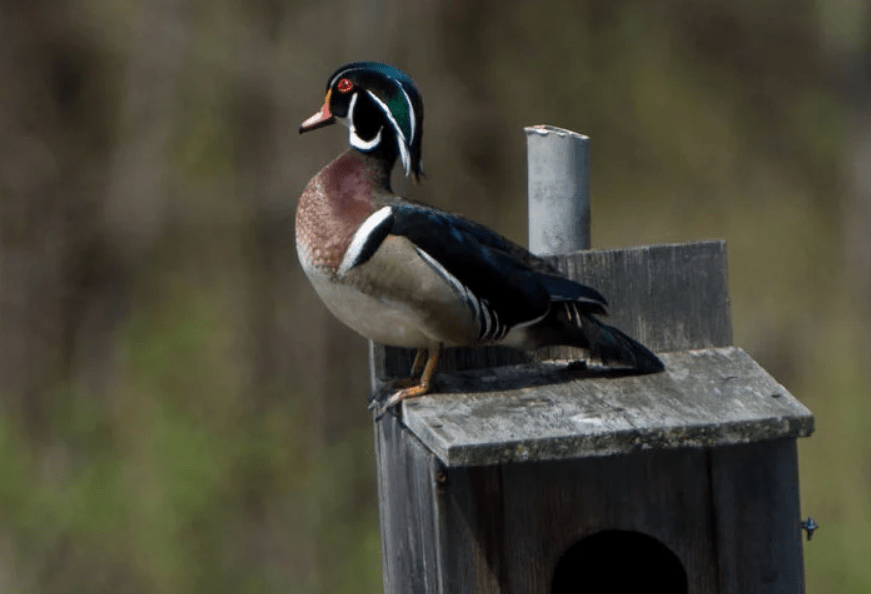 Well, the question arises that shouldn’t the female owl be able to realize she’s sitting on the wrong eggs? As wood duck eggs look all different, Not only they are more oblong-shaped than owl eggs but also about twice the volume.

About the psychology of the owl, scientist Artuso said that it’s impossible to infer what a wild owl is thinking and that this could be a case of what scientists call supernormal stimuli.

“The parents might be thinking, Oh my god! This egg is huge! We’re going to have the best baby in the world!”

He added that the eastern screech owls didn't develop a defense against it, but it’s more likely that the occurrence is rare.

What Were the People’s Reactions on this Story? 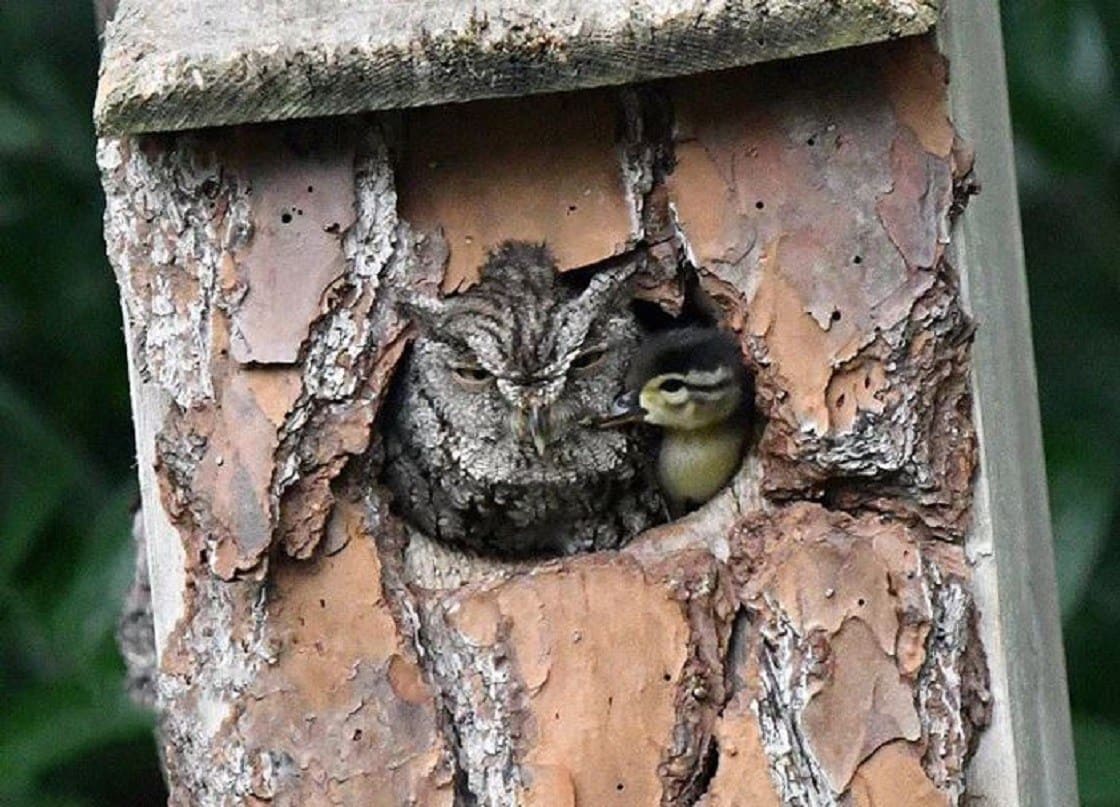 “What matters is mothers love”

“Ducks float because they’re made of wood”

“Talk about the child that was the picky eater… Mom I don’t want a mouse... I am a Vegetarian”

Well, all we can see is, it’s something amazing to know. Also, it is another great example of motherly love. Whether it's animal or human, motherly love is the same for all.

An amazing story it is!