17 Most Amazing Reindeer Facts to Quench Your Curiosity

Reindeers are one of the coolest creatures primarily found in northern regions of North America, Siberia, and Eurasia. They have... 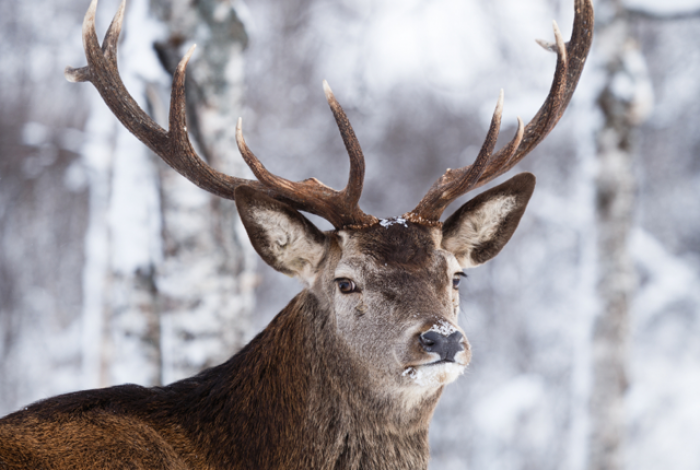 Reindeers are one of the coolest creatures primarily found in northern regions of North America, Siberia, and Eurasia. They have been an important part of our Christmas celebration, music and pictures.

Known as Santa’s ninth reindeer, Rudolph is one legendary reindeer who has a famous Christmas carol ‘Rudolph the red-nosed reindeer’ penned on it. But there’s much more to reindeer than just being a Christmas decoration or sled-pulling animal! 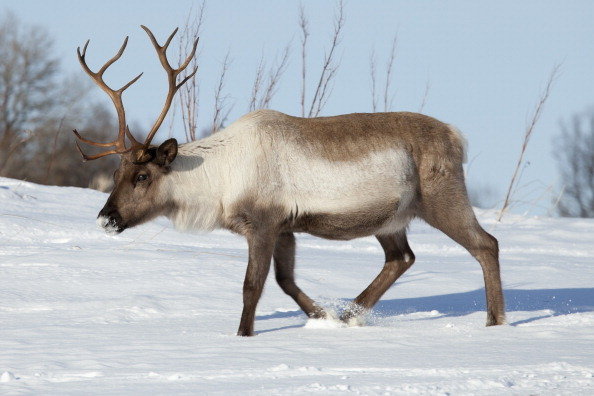 1. All caribou are reindeer but not all reindeer are caribou

Well, yes! Caribou are the reindeer native to North America and those native to Europe or Asia are simply called reindeers. They were considered different species before but they both mean the same thing. Based on the type of region they inhabit, ‘tundra’ and ‘woodland’ are two major groups of reindeer. They are further classified into nine to thirteen subspecies of which at least one is said to be extinct.

2. There is a mutation in the species due to which some reindeer really have red noses

The scientists at the Netherlands and the University of Rochester in New York discovered this fact in research. They said that the red nose in reindeer is because of a dense network of blood vessels near its skin surface. Also, they have 25% more blood capillaries in their nasal architecture than humans. It is necessary for regulating their internal body temperature. 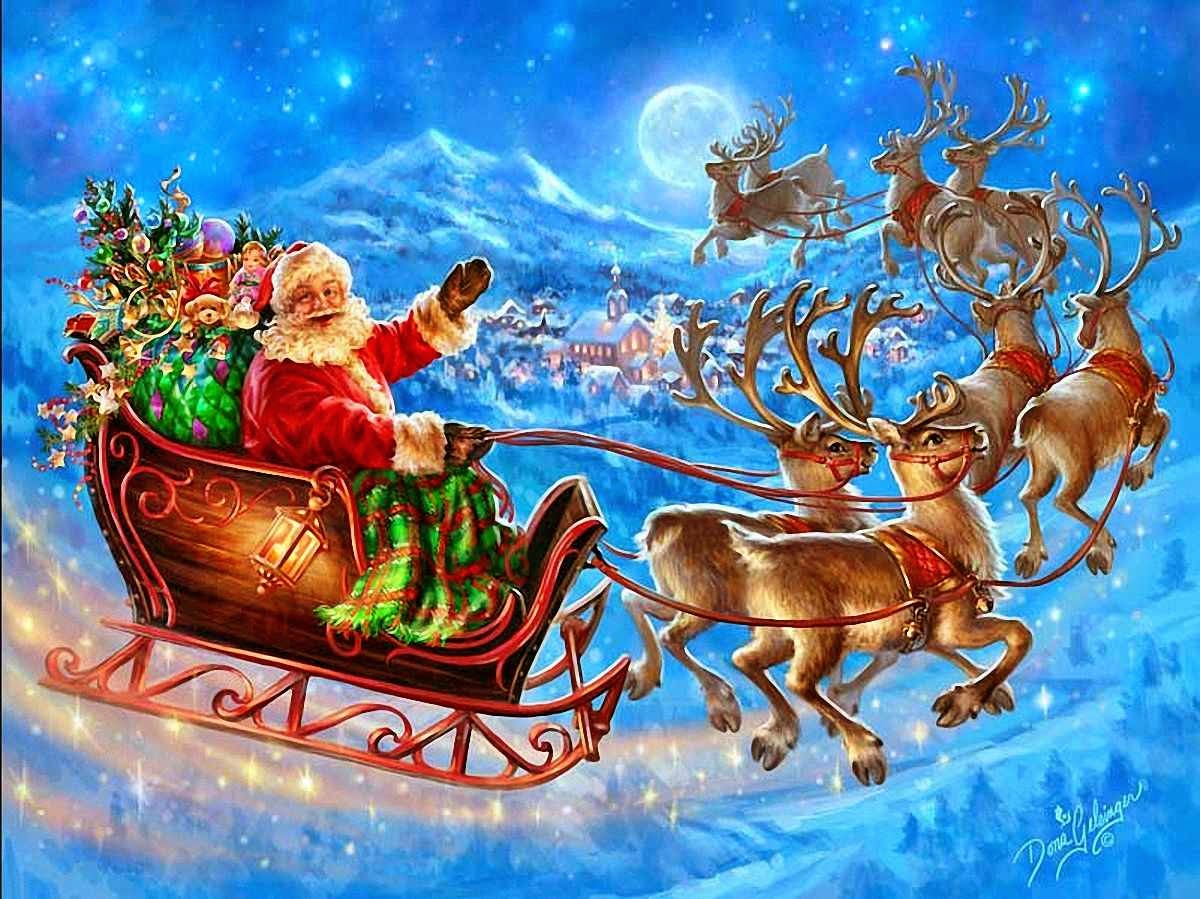 3. The first connection between Reindeer and Santa was formed through a poem

In the 1823 poem  “A Visit from Saint Nicholas” (“The Night Before Christmas”) written by Clement C Moore, Santa’s reindeer was introduced for the first time. He named the eight reindeers pulling the Santa’s sleigh as Dasher, Dancer, Prancer, Vixen, Comet, Cupid, Donner, and Blitzen.

And in 1939, Robert L.May created the legendary reindeer “Rudolph the Red-Nosed Reindeer” in a children’s book written by him.

4. ‘Reindeer’ word has a bizarre and interesting etymology

The name ‘reindeer’ finds its origin from the old Norse word ‘hreinn’ meaning “horned animal”. ‘Caribou’ is derived from a French word meaning “snow shoveler,” which refers to its habit of delving into the snow in search of food.

In several Eastern European languages, the word root for the reindeer originates from an Iranian loan word ‘pocaw’ meaning “cattle.” This sounds legit as the reindeer in these regions were semi-domesticated and were used for transportation, meat, milk, and fur. 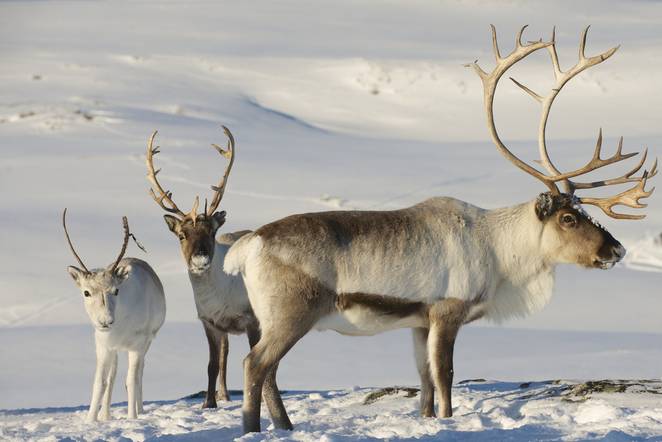 5. Reindeer are the only mammals that have the ability to see UV (ultraviolet) light

Researchers at University College London found that reindeer have a sharper vision than humans. While humans are able to see up to 400 nm, reindeer can see up to 320 nm.

Their ‘super sight' and ability to see UV light help them survive in the wild and harsh Arctic. White fur and urine are almost impossible for humans to see in the snow but reindeer can see it pretty easily.

We know that reindeer live predominantly in the northernmost regions of the globe in the present times. But in the Pleistocene era, when our Earth was way cooler and habitat was much safer, they lived in the southern regions of Nevada, Tennessee, and Spain. Their habitat has dwindled in the past few centuries. In the 19th century, reindeer used to live in Southern Idaho. 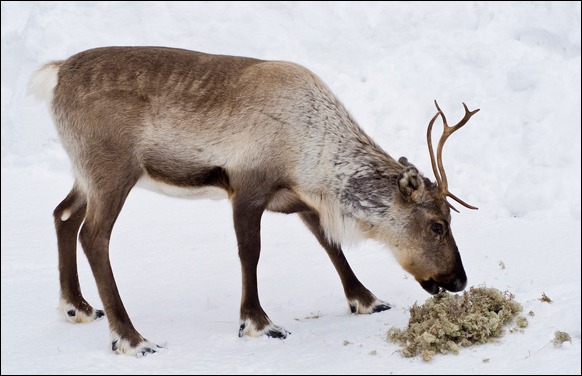 7. Some North American caribou migrate over 3,100 miles per year- that’s the furthest a land mammal travels

Certain North American caribou travel nearly 23 miles in a day covering more than 3,100 miles per year. When reindeer run and swim at their top speeds, they cover 50 miles per hour and 6.2 miles per hour respectively. The baby reindeer quickly learn to walk fast and that too in only 90 minutes of being born.

8. Reindeer eat sub-arctic lichens that help in keeping their blood warm and energy-packed

Reindeer like to eat lichen (known as reindeer moss) that are grown in the subarctic climatic regions. It helps in keeping their blood warm and surviving the chilly winters. Their strong sense of smell helps them sniff lichen beneath the snow, even if it’s 60 cms deep. 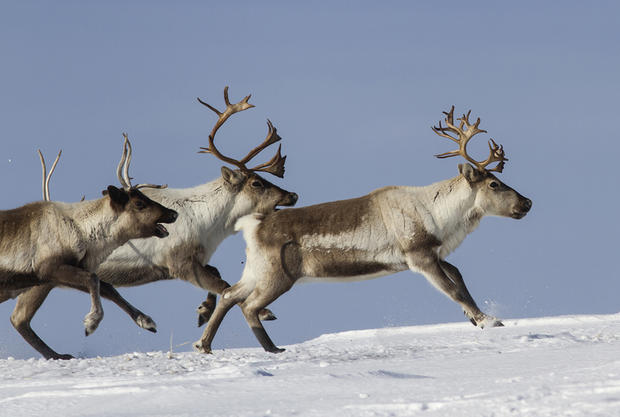 9. Sami people have approximately 400 words for the food, tools, and other products made from reindeer

Reindeer is a culturally significant animal for the natives of northern Finland ‘Sami’. It also serves as an important means of survival for them. These people have nearly 400 words for the tools, food, other products, and parts taken from reindeer.

Reindeer is quite a running machine that are highly energy efficient than most of the other land animals.

11. Reindeer’s ankle tendon helps them in keeping a track of each other

Reindeer have a special tendon in their ankles which rubs over their bone while walking and makes a clicking sound. It helps them keep a track of one another, especially during bad weather conditions. 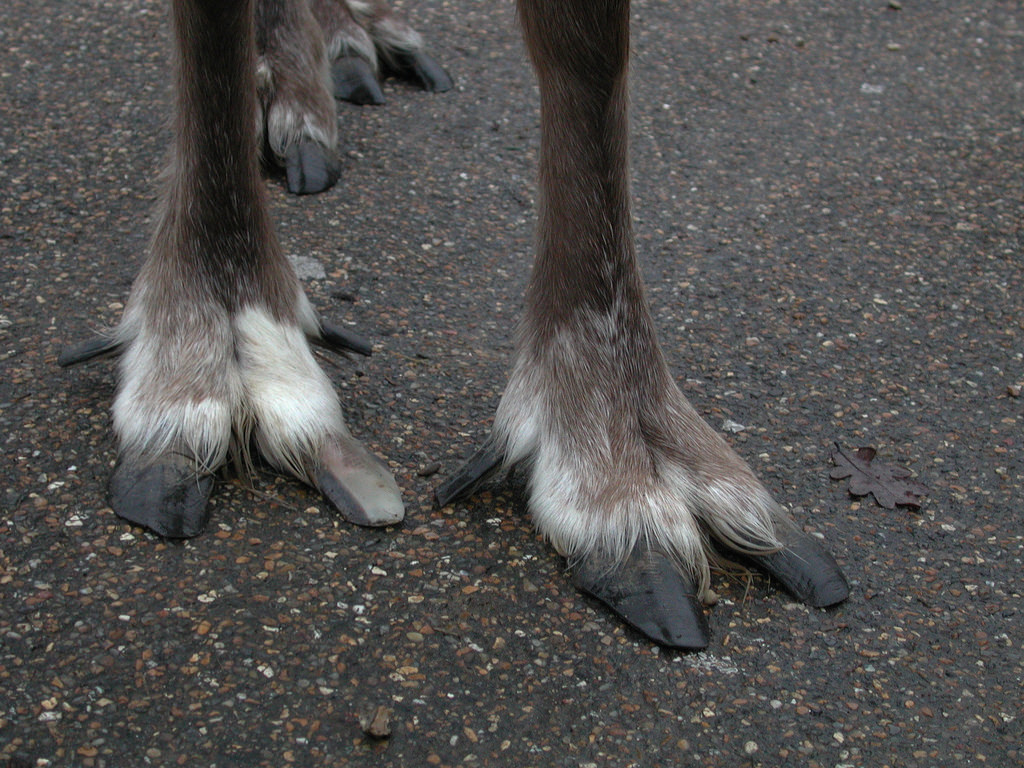 12. You cannot always guess whether a reindeer is male or female

In deer species, it is mostly the male deers who have antlers but that’s not always true in the case of reindeers. Female reindeers mostly have antlers except for some of them.

At certain points of the year, one may still guess the sex of a reindeer by looking at the antlers. This is because females lose their antlers in summers while males shed in springs or winters. The males are much bigger than females but you may be tricked if you spot a large female or a small male.

Reindeers lose their antlers at different points of the year depending on their sex and age. Santa’s reindeer are mostly depicted with antlers so they can’t be older males as they shed their antlers in December. This implies that Santa’s sled is either pulled by young reindeer (male or female) or an older female.

14. Santa’s reindeer is possibly a reindeer subspecies found on the Svalbard archipelago of Norway

Clement C Moore was the first one to tell the world about Santa’s reindeer in his poem "A Visit from Saint Nicholas” and called them “tiny”. The only known reindeer known to have been tiny is the Svalbard subspecies ‘RT Platyrhynchus’. They have almost half the weight of an average reindeer species and are nearly 1 foot shorter. 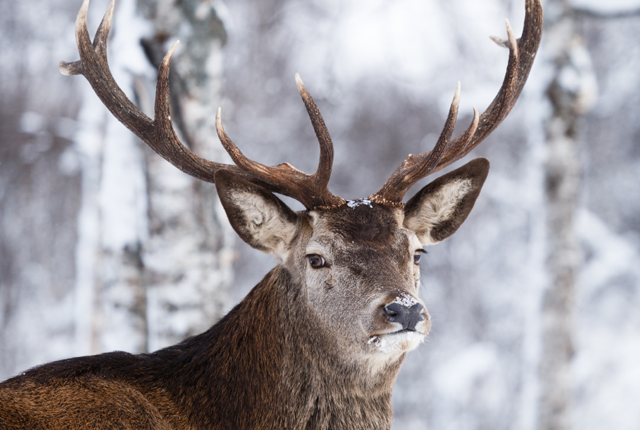 15. Reindeer has been pivotal as a means of survival for many cultures

From the Mesolithic and Neolithic age till modern times, reindeers have helped the tribes of Canada and Scandinavia survive. In modern Scandinavia, reindeer is still considered popular meat. Most of its body parts are edible and are key ingredients of traditional dishes prepared in this region.

One can also still find the reindeer guiding fences, trapping pits and bow rests in Norway that date back to the Stone Age. The reindeer has helped in meeting the basic needs (food, clothing, shelter, and tools) such as those of Inuit people in North America for thousands of years.

Many tribes adhere to the old traditional practices that restrict the selling of meat and also the number they may kill on each hunting.

16. The evolutionary enhancements in the reindeer make the hard life in cold climes easy for them

Reindeers have gone through brilliant evolutionary enhancements thus developing a special built that makes their life easy in the tough and cold environments of tundra. The nose of the reindeer is well-adapted to warm the air they breathe in before it reaches their lungs. Also, their nose can condense the water in the air to keep their mucous membranes wet.

The furs of the reindeer trap air and help in providing insulation. It also allows them to stay afloat in water. Their hooves (or footpads) expand in summer when the ground is soft and moist thus allowing for extra friction. And in winters, their hooves tighten thus offering friction in slippery snow and ice when the ground is hard.

17. The Finnish forest reindeer is the largest reindeer species measuring up to 240 centimeters.

The largest reindeer species ‘Finnish forest reindeer’ measure nearly 240 cms in length from snout to tail. They are known to have much longer legs than other reindeer subspecies and their antler pairs grow closer together than those of other subspecies. All this allows them to cross the forests without any hurdles.

9 Surprising Facts That Furry Weasel Hides Under Its Tail