A courtship display is a set of display behaviors in which an animal attempts to attract a mate and exhibit their desire to copu... 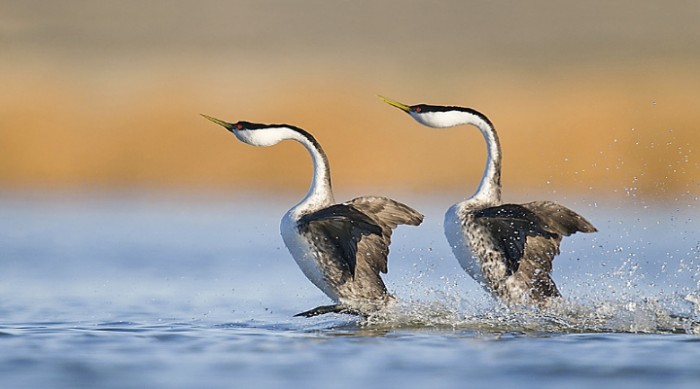 A courtship display is a set of display behaviors in which an animal attempts to attract a mate and exhibit their desire to copulate. These behaviors often include ritualized movement ("dances"), vocalizations, mechanical sound production, or displays of beauty, strength, or agonistic ability. Read on further for the super weird mating dances of birds!!

The repertoire of behaviour involves synchronised performances of various actions such as preening, pointing, calling, bill clacking, staring, and combinations of such behaviours (like the sky-call). When a bird first returns to the colony it will dance with many partners, but after a number of years the number of birds an individual will interact with drops, until one partner is chosen and a pair is formed.

The Mating rituals can include a mixture of head and wing movements or a single act such as the head flagging, marching, the wing salute or the wing leg stretch. In the head-flag movement, flamingos turn their head from one side to another. The marching ritual can be described as a group of flamingos walking in synchronized directions.

The courtship of the blue-footed booby consists of the male flaunting his blue feet and dancing to impress the female. The male begins by showing his feet, strutting in front of the female. Then, he presents nest materials and finishes the mating ritual with a final display of his feet. The dance also includes "sky-pointing".

In courtship the male bowerbird will dance to the female in an attempt to attract her.

The complex mating behaviour, with its highly valued types and colors of decorations, has led some researchers to regard the bowerbirds as among the most behaviorally complex species of bird.

Groups of males perform for the female, and she picks her favorite drake with the best plumage and the best display. Head-Pumping, Head-Up-Tail-Up, Grunt-Whistle, & Nod-Swimming are some basic mating rituals that if you observe carefully, you can easily identify as Courtship.

A lone male gives an ecstatic display, where it stands still and places its head on its chest before inhaling and giving a courtship call for 1–2 seconds; it then moves around the colony and repeats the call. A male and female then stand face to face, with one extending its head and neck up and the other mirroring it; they both hold this posture for several minutes.

Each spring, males congregate in leks and perform a "strutting display". Groups of females observe these displays and select the most attractive males with which to mate. The dominant male located in the center of the lek typically copulates with around 80% of the females on the lek.

Western and Clark's grebes engage in a maneuver called rushing during the spring mating season, in which they sprint up to 66 feet (20 meters) across the water in coordinated groups of two or more in about seven seconds.

One of the most weird mating rituals that can be seen in birds is of Dunnocks, and it’s because of their polygamy practices.

DNA fingerprinting has shown that chicks within a brood often have different fathers, depending on the success of the males at monopolising the female. Males try to ensure their paternity by pecking at the cloaca of the female to stimulate ejection of rival males' sperm.

Many manakin species have spectacular lekking courtship rituals just like this Red-Capped Manakin who appears to imitate the killer dance moves of the pop legend Michael Jackson.

During courtship, this breathtakingly beautiful tail is spread out into a fan and quivered by the male in an attempt to attract a mate. The female of the species has a duller brown plumage with its neck being a greenish color.

When the male begins to display, he erects the feathers of his throat and sides to accentuate the bright colours of his plumage in the shafts of sunlight that pierce the dimness of the rainforest. He curves his rounded wings above his body and tilts his head back to expose his chin and throat to the light, and then moves from side to side in a fashion that looks almost mechanical.

Sandhill Cranes have an elegance that draws attention. These tall, gray-bodied, crimson-capped birds breed in open wetlands, fields, and prairies across North America.

Mates display to each other with exuberant dances that retain a gangly grace.