11 Notorious Animals Who Get Crazily Drunk

Humans have been looking for mind altering substances since centuries. Archaeologists also found beer in the ancient burial cham... 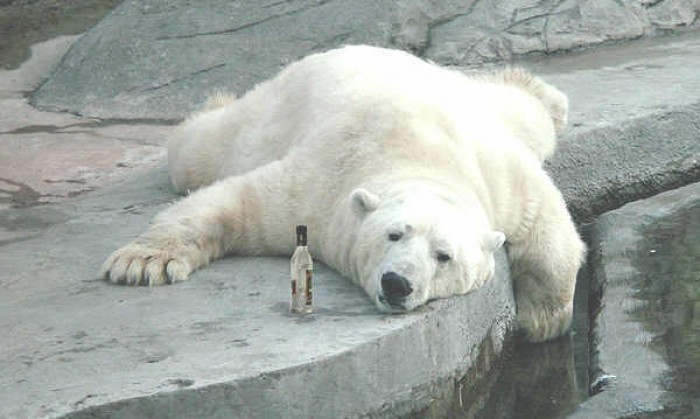 Humans have been looking for mind altering substances since centuries. Archaeologists also found beer in the ancient burial chambers of pharaohs. The process of making wine from grapes dates back to the Neolithic period. Economies or recession do not make any difference in the sale of alcohol. The sales of alcoholic beverages have been increasing day by day. But humans aren’t the only creatures on planet that consume alcohol.

Most creatures in the animal kingdom are also attracted to alcohol. Some of them eat fermented fruits and others steal alcohol beverages from humans. Here are some animals whose love for alcohol has been much known and which sometimes leads them to disastrous results. 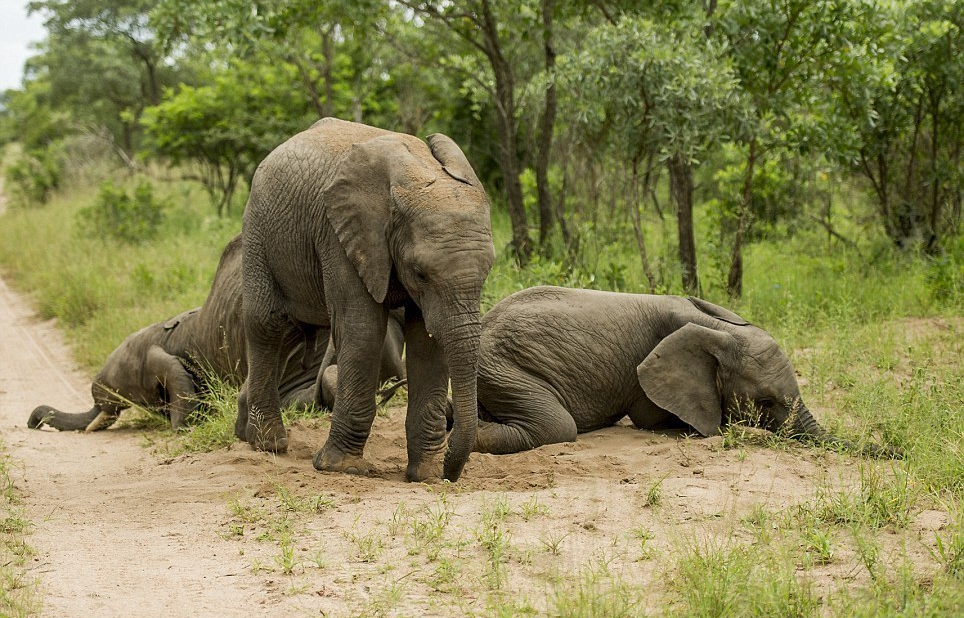 Elephants of southern Africa often binge on the fruits of marula tree that are naturally fermented and lumber unsteadily afterwards. A study was conducted in 1984 that showed elephants were happy to drink 7% alcohol solution and they drank enough that altered their behavior. They actually didn’t act like the alcoholic humans do but they decreased their time spent on drinking, feeding, bathing and became lethargic.

Elephants have had various benders; they have raided beer supplies in a town or village before celebrations. But it takes a lot for an elephant to get drunk. A 3,000 kg elephant requires 10 to 27 liters of 7% alcohol solution in a short time to experience behavioral changes. With the marula fruit, it has to eat 400% of its normal feeding while avoiding water intake.

Bats also get drunk with a fermented food. But the bats of Central and South America are able to handle their alcohol. The highest blood alcohol content (BAC) tested in bats was 0.3%, according to a study published by PLOS One in 2009. The maximum limit of BAC while driving in United States is 0.08%.

Bats were successfully able to fly through all obstacle courses with their sense of echolocation. However, Egyptian fruit bats had higher cases of collision than the American ones. Biologist Brock Fenton told National Geographic that American bats have high tolerance capabilities which allow them to consume those fruits that other animals were not able to eat.

Also known as green monkeys, vervet monkeys are native to Africa. Their alcohol addiction began 300 years ago when they discovered fermented sugarcane in the period that was peak for plantation era. They were so influenced by ethanol that 1 in 5 monkeys preferred to drink alcohol over water. This was stated by a study published in 1993 by Pharmacology Biochemistry and Behavior 46. The study also discovered that just like humans, teenage monkeys consumed more alcohol that adults. The reason behind adults drinking less is to stay more alert and responsible.

Approximate 5% of their population is alcoholic. They even steal beverages from humans at local beaches. Local people often catch these wild monkeys by supplying them rum and molasses in hollow coconut shells. These drunken primates could then be captured without any hassle.

Bears are another animal that you would definitely not want to cross if they are drunk. They are not as large as elephants but their claws and teeth are enough to make it up. A black bear was found in 2004 by Fish and Wildlife agents in Washington. It was in the lawn of Baker Lake Resort. Neither sleeping nor injured, the animal was drunk. It had raided the coolers of nearby campus and taken down various cans of beer. More notably, he was not happy with any ordinary beer but cans of Rainier Beer. 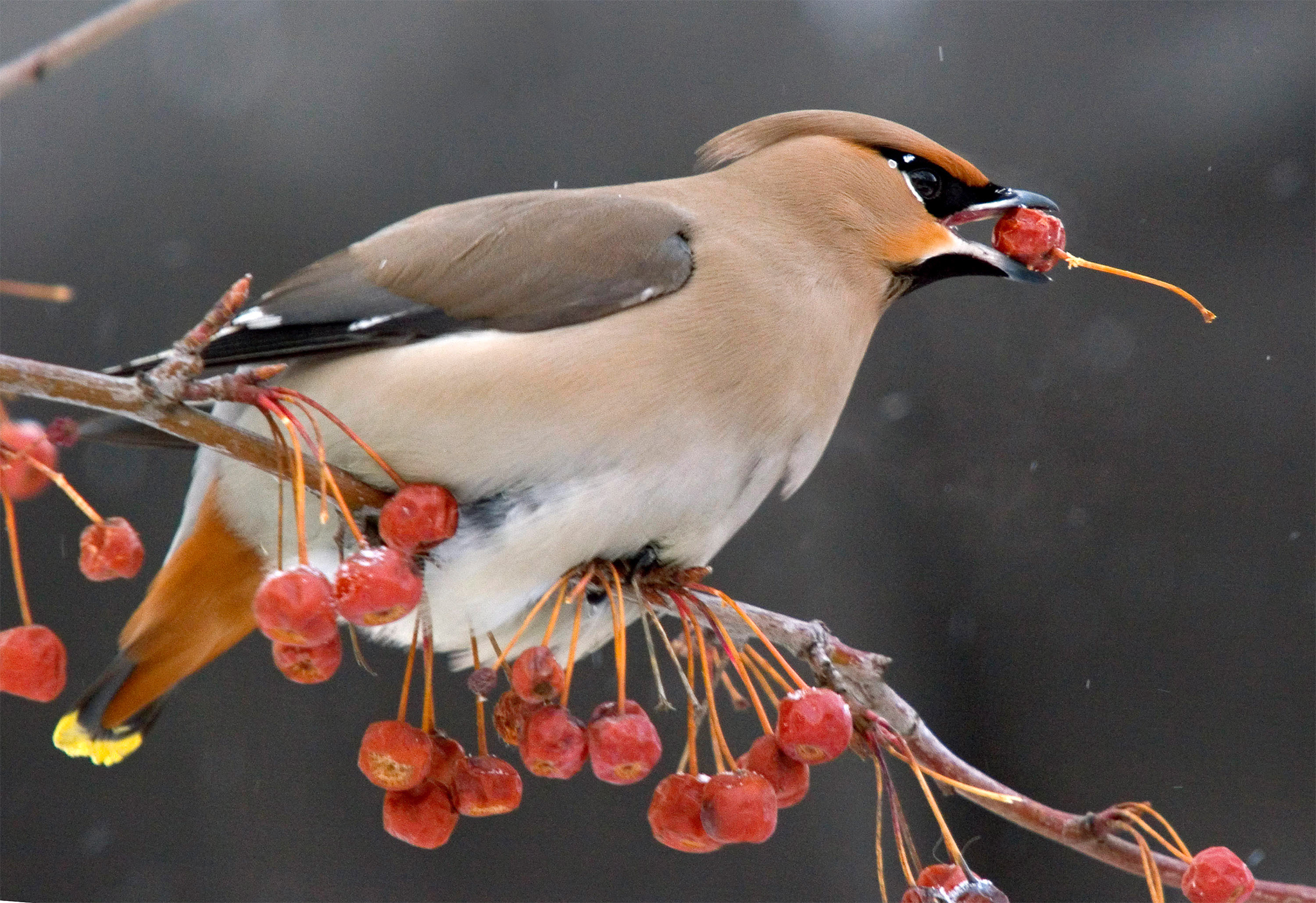 It’s not only humans who like to celebrate the holiday season with alcohol but also animals. Bohemian waxwing birds love to feast on berries of rowan trees. These berries ferment when the weather gets cool which turns them into alcohol.

Bohemian waxwing birds belong to the northern parts of North America and Eurasia. Most of them like to get a little buzzed but others do not know when to stop. Some even turn to “drunk flyers” which means fatal crashes with buildings. Some collisions have also been recorded. In certain cases, these birds become intoxicated and are admitted to animal healthcare units.

Pen-tailed tree shrews are tiny animals living in the rainforests of Malaysia. They drink alcohol from the fermented fruit of bertam palm tree every night. Researchers found that the nectar of this fruit contained 3.8% alcohol content, same as that of a weak beer. They saw the tree shrew returning to this tree three times in a night. But no signs of drunkenness were found with them, they can perhaps hold liquor.

Intoxicating pufferfish’s poison is 50 million times more deadly than marijuana and 40,000 times dangerous than the deadly drug meth. The poison is known as tetrodotoxin, one dose of it can kill humans and dolphins. Before the whole body gets paralyzed, it makes you feel numb, tingly and light headed. But rough toothed dolphins live their life on this. A zoologist and producer of the BBC documentary, Dolphins – Spy In the Pod, Rob Pilley said that they filmed dolphins after they chewed pufferfish and they were “acting peculiar”. 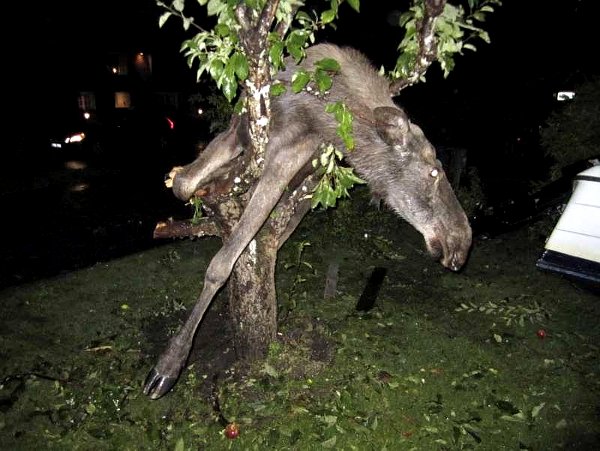 A moose was recently found stuck in an apple tree in Sweden. The animal was eating fermented apples and it got its legs entangled in the small tree. It was woozy but otherwise fine. It was freed by a local man, hunter and fire department. 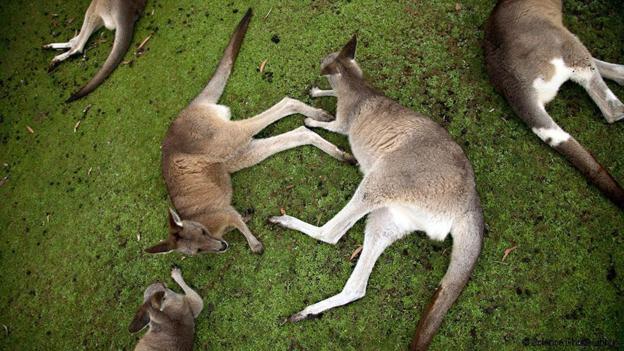 Wallabies are small pouched mammals related to kangaroo. They have been causing problems since years in the opium poppy fields in Australia. Australia is the supplier of 50% legally grown opium in the world. It is used to make morphine and other painkillers. Australian wallabies get high with opium and hop around the field, thereby making crop circles. These crop circles became so serious that the security of poppy crops in Tasmania was also debated at a parliamentary hearing.

Lyndley Chopping is a retired farmer, in a conversation with Australian Broadcasting Company, he said-

10. Caterpillars of Peru and Columbia

Caterpillars of Peru and Columbia feed entirely on coca leaves. Cocaine is derived from this plant. Researchers of the Ohio State University carried out a study on South American caterpillars for 10 years. They wanted to find out how they were they living and consuming so much cocaine. They discovered that these caterpillars were immune to the ‘fun’ part of cocaine. They were not affected by the rush of euphoria. Their research was ultimately inconclusive.

Bush administration also made a proposal in 1990 to unleash these caterpillars on coca plants in order to halt the drug trade but it did not happen. 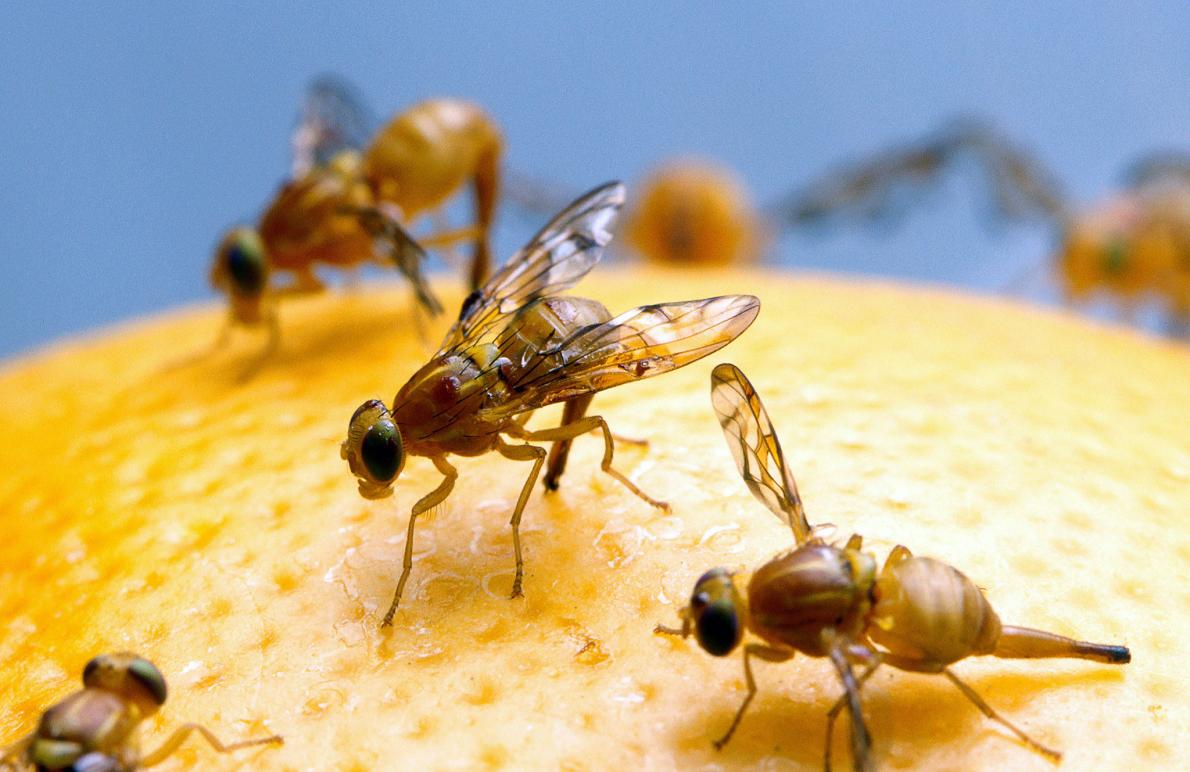 Bees can get drunk by a fermented nectar but this often causes them flying accidents. Some bees are so wasted that they forget their way back home. But it’s even more tragic for those bees who manage to go back to their hive. Some hives even pose severe penalties for bees that are caught flying under influence, even attacking the drunken bee at time says, entomologist Errol Hassan. A similar video is given below.

But apparently it’s legal to consume caffeine and nicotine in the bee community. The study conducted by University of Haifa in 2010 showed that bees prefer that nectar that contains nicotine and caffeine instead of the normal ones. They can easily find natural production of nicotine in the floral nectar of tobacco trees and caffeine from citrus.

Some male flies also turn towards alcohol when they are sexually rejected. In a study that was conducted in 2012 by the journal Science, a comparison was made in the diet preferences of male fruit flies that had successfully mated with the diet of male flies that had not mated. They found that unmated flies preferred alcohol containing foods while the mated flies did not have these preferences.

Also, mated flies have higher levels of a brain chemical called neuropeptide F. this chemical also spikes when flies receive a reward like sex. But unmated flies have a lower level of this chemical which may also be a reason of them preferring alcohol for the fulfillment of their satisfaction. For this theory, unmated male fruit flies were given artificial doses of neuropeptide F and they avoided alcohol.

There is another reason for flies consuming alcohol. Parasitic wasps lay eggs in flies’ bodies like they do with many other insects. To stop these wasps from devouring them, fly larvae consume alcohol at toxic levels. This kills most of the wasps and those who survive are deformed.

Flies also use alcohol as a vaccine. At the sight of a parasitic wasp, female flies lay their eggs on alcohol soaked food which protects the hatchlings from wasp. Females are also able to make out the difference between males who could impregnate their young ones and those who could not.

There is a protein called Adf1 that relates to the long term memory of flies. It also controls their ability to remember their wasp foes for days. The genes that break down alcohol are also controlled by Adf1. It allows flies to tolerate the booze and also beat the dangers through booze.